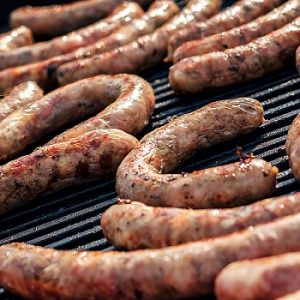 The scientific link between bowel cancer and processed meat such as bacon, sausages and deli meats is now stronger than ever. [Photo: Bigstock]

WHO agency: Processed meat is a human carcinogen

Natural Health News — Days, indeed weeks, of speculation ended this afternoon with a much anticipated statement by the International Agency for Research on Cancer (IARC), on the cancer-causing potential of red meat.

The IARC, the cancer agency of the World Health Organization, meets three times a year, and forms working groups to evaluate how particular substances impact the risk of developing cancer in people.

The most recent meeting focused on red and processed meats. To this end the IARC has considered more than 800 studies that investigated associations of more than a dozen types of cancer with the consumption of red meat or processed meat in many countries and populations with diverse diets.

The most influential evidence came from large prospective cohort studies conducted over the past 20 years.

The assessment, summaries of which can be found in today’s Lancet Oncology, are startlingly strong and for some may be shocking.

After thoroughly reviewing the accumulated scientific literature, a Working Group of 22 experts from 10 countries convened by the IARC Monographs Programme classified the consumption of processed meat as Group 1 carcinogen in humans.

A group 1 classification is given when there is sufficient evidence that a substance causes cancer in humans. In this instance the IARC made the classification based on the evidence in humans that the consumption of processed meat causes colorectal cancer.

This classification puts processed meat on the same level of risk as smoking.

Processed meat refers to meat that has been transformed through salting, curing, fermentation, smoking, or other processes to enhance flavour or improve preservation. Most processed meats contain pork or beef, but processed meats may also contain other red meats, poultry, offal, or meat by-products such as blood.

Red meat was classified as a Group 2A carcinogen in humans.

A group 2A classification means that a substance is probably carcinogenic to humans, based on limited evidence that the consumption of red meat causes cancer in humans and strong mechanistic evidence supporting a carcinogenic effect.

This association was observed mainly for colorectal cancer, but associations were also seen for pancreatic cancer and prostate cancer.

Red meat refers to all types of mammalian muscle meat, such as beef, veal, pork, lamb, mutton, horse, and goat.

The IARC experts concluded that each 50g portion of processed meat eaten daily increases the risk of colorectal cancer by 18%.

“For an individual, the risk of developing colorectal cancer because of their consumption of processed meat remains small, but this risk increases with the amount of meat consumed,” says Dr Kurt Straif, Head of the IARC Monographs Programme.

“In view of the large number of people who consume processed meat, the global impact on cancer incidence is of public health importance.”

“At the same time, red meat has nutritional value. Therefore, these results are important in enabling governments and international regulatory agencies to conduct risk assessments, in order to balance the risks and benefits of eating red meat and processed meat and to provide the best possible dietary recommendations.”

Some news outlets – which coincidentally rely on advertising from producers of meat products – have misrepresented the assessment as a ‘scare story’ or ‘just another study’ when in fact an IARC assessment carries much more weight than that.

IARC specifies that its classifications “do not measure the likelihood that cancer will occur (technically called “risk”) as a result of exposure to the agent.”

Likewise, it makes no specific judgement on quantities and indeed the report acknowledged that the consumption of meat varies greatly between countries, with from a few percent up to 100% of people eating red meat, depending on the country, and somewhat lower proportions eating processed meat.

The real bottom line is that the IARC is using its considerable power and resources for public good. And this is not the first time that the Agency has made a ruling that had an impact on agriculture.

Earlier this year IARC ruled that glyphosate, one of the most widely-used herbicides in agriculture, was a 2B carcinogen “probably carcinogenic to humans.”

Pesticide companies fought this ruling as hard as meat producers are fighting the red meat classification.

IARC has a serious job to do; informing us of potential risks so that we can make sensible judgements. We should respect that – even if it tells us something we don’t like. Its findings will be welcomed by cancer researchers.

The organised and well-funded backlash from the meat industry, while not unexpected, has neither our health nor planetary health at its heart. Instead it is focused purely on maintaining a marketplace that for a variety of health and environmental reasons (indeed there is no question meat production is a major driver of climate change), may no longer be fit for purpose.

The scientific link between bowel cancer and processed meat such as bacon, sausages and deli meats is now stronger than ever. [Photo: Bigstock]