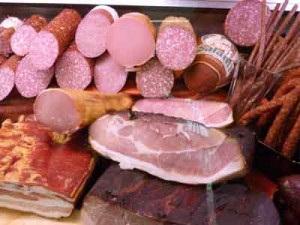 Scientists say eating too much red and processed meat raises the risk of premature death from all causes [Image: Morguefile]

Cut back on red meat to live longer, say experts

Natural Health News — Our increasing consumption of both processed and unprocessed red meat is associated with a greater risk of dying from all causes, according to a new analysis.

The study from Harvard School of Public Health (HSPH) and published in the Archives of Internal Medicine found that red meat consumption is associated with an increased risk of total, cardiovascular, and cancer mortality.

The researchers  prospectively observed 37,698 men from the Health Professionals Follow-up Study for up to 22 years and 83,644 women in the Nurses’ Health Study for up to 28 years who were free of cardiovascular disease (CVD) and cancer at baseline. Diets were assessed through questionnaires every four years. Unprocessed red meat included beef, pork, lamb, or hamburger and processed red meat included bacon, hot dogs, sausage, salami, and bologna.

Among specific causes, the corresponding increases in risk were 18% and 21% for cardiovascular mortality, and 10% and 16% for cancer mortality. These analyses took into account chronic disease risk factors such as age, body mass index, physical activity, family history of heart disease, or major cancers.

Red meat, especially processed meat, contains ingredients that have been linked to increased risk of chronic diseases, such as cardiovascular disease and cancer. These include heme iron, saturated fat, sodium, nitrites, and certain carcinogens that are formed during cooking.

Cutting our consumption in half

It was estimated that 9.3% of the deaths in men and 7.6% of the deaths in women could have been prevented by consuming less than half of a serving of red meat (42 grams) per day, roughly equivalent to about one hot dog, the researchers reported online in Archives of Internal Medicine.

The results also showed that replacing one serving of total red meat with one serving of a healthy protein source was associated with a lower mortality risk: 7% for fish, 14% for poultry, 19% for nuts, 10% for legumes, 10% for low-fat dairy products, and 14% for whole grains.

The authors acknowledged that the study was limited by the difficulty of relying on participants’ memories of red meat  meat intake. The findings are also difficult to generalise to the whole population because it studied mainly white health professionals. However this by no means the first time researchers have reached this conclusion.

In 2007, the American Institute for Cancer Research (AICR) published their second review of the major studies on food, nutrition, and cancer prevention. For cancers of the oesophagus, lung, pancreas, stomach, collorectum, endometrium, and prostate, it was determined that red meat (beef, pork, or lamb) and processed meat consumption possibly increased cancer risk. For colorectal cancer, a review of the literature determined that there is convincing scientific evidence that red meat increased cancer risk and that processed meat, saturated/animal fat, and heavily cooked meat were also convincing of increased risk.

In 2010 research by Oxford University’s Department of Public Health found that eating less meat would mean 31,000 fewer deaths from heart disease, 9,000 fewer cancer deaths and 5,000 fewer deaths caused by stroke in the UK each year. This data was rolled into a report by Friends of the Earth called Healthy Planet Eating, which pulled together all the human health data  as well as the environmental benefits of reducing our meat consumption.

In February 2011 updated nutritional advice, issued by the Department of Health, recommended that people who eat lots of red and processed meat cut their daily intake in order to reduce the risk of bowel cancer. You can read that advice here.

If you find this data timely and are interested in reducing your meat consumption, why not enter our Meat Free Monday Cookbook competition – a good place to start. Closing date March 17.

Scientists say eating too much red and processed meat raises the risk of premature death from all causes [Image: Morguefile]