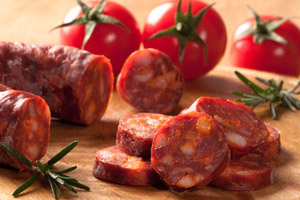 Antibiotic residues in 'uncured' sausages such as chorizo, pepperoni and salami may kill friendly bacteria that keeps the meat fresh

Sausage manufacturers commonly treat sausage meat with lactic-acid-producing bacteria to control the fermentation process so that the final product is acidic enough to kill pathogens that might have existed in the raw meat. Sausages such as like pepperoni, salami, or chorizo are commonly treated this way. But, by killing the bacteria that produce lactic acid, antibiotic residues can allow pathogenic bacteria to proliferate.

Fermented sausages have occasionally been known to cause serious bacterial infections, but it’s never been understood why.

Now in a laboratory study published in the online journal mBio, researchers at the University of Copenhagen, Denmark, and University College Cork, Ireland, found that antibiotic concentrations within limits set by US and European Union (EU) regulators are high enough to slow fermentation, the process that acidifies the sausages and helps destroy foodborne pathogens like Salmonella or E. coli.

The researchers found that several different starter cultures of lactic-acid-producing bacteria were sensitive to these antibiotics and hence did not acidify the sausage meat effectively – results that could explain why people sometimes get sick from eating fermented sausage.

The results show antibiotics can potentially have a paradoxical effect by reducing the effectiveness of bacteria that should make the sausages safe but not affecting the bacteria that can cause food poisoning.

Antibiotics used on the farm to blame

So how can we be sure antibiotic residues don’t interfere with the safety of these products?

The European Union and other countries have banned the use of antibiotics in livestock as growth promoters, though the US remains reluctant to follow suit.  However it should be pointed out that the sausage meat samples in this study still had enough antibiotic residues to cause problems. This may be because some unscrupulous farmers ‘treat’ their livestock with antibiotics when they aren’t really sick.

What’s in a cure?

The curing process for meat was created out of the need to keep it from spoiling during storage. Curing agents also give these meats a specific flavour that is hard to imitate without them. This is why organic certifiers, controversially, say they allow nitrites and nitrates in organic bacon and other cured meats.

For centuries salt and saltpetre were used to cure meat. Today there are many different levels of curing and in reality even those meat that claim to be ‘uncured’ have gone through some kind of curing process such as lactic acid fermentation.

In reality most uncured meats are simply those that don’t have sodium nitrate or sodium nitrite specifically added as preservatives.

So is cured meat ‘better’?

Whatever the advantages in terms of food preservation, cured meat is still problematic from a health perspective.

Under certain not entirely predictable conditions, the natural breakdown products of proteins known as amines can combine with nitrites preservatives to form compounds known as nitrosamines.

Nitrosamines are the same chemicals found in cigarette smoke. There are many different types of nitrosamines, most of which are known carcinogens. Cooking both cured and uncured meats at a very high heat (as in frying) may promote the formation of nitrosamines called heterocyclic amines, or HCAs.

Most recently the World Cancer Research Fund (WCRF) has concluded that consumption of cured meats is a big risk factor for bowel cancer.

The joint WCRF/AICRS 540-page report, Food, Nutrition, Physical Activity, and the Prevention of cancer: a Global Perspective was produced by a large expert panel of scientists from around the world and found convincing evidence of the link between the foods we eat and several types of cancer. Some of its recommendations can be found in a user-friendly format here.

Specifically it found that including just 1.8 ounces of processed meat a day –  the equivalent of one sausage or three pieces of bacon – raises your risk of developing bowel cancer by 20%.

In 20011 an update and review of the evidence by WCRF prompted this conclusion:

“There is strong evidence that … processed meats are causes of bowel cancer, and that there is no amount of processed meat that can be confidently shown not to increase risk …Try to avoid processed meats such as bacon, ham, salami, corned beef and some sausages.”

Diets high in processed meats tend to displace healthier foods with known cancer-fighting properties such as fruits and vegetables and unprocessed grains and pulses.

In addition to bowel cancer, other studies have also found that processed meats increase your risk of colon cancer by 50%, bladder cancer by 60%, stomach cancer by 38%, pancreatic cancer by 67%,

Processed meats may also increase your risk of diabetes by 50%, as well as increasing your risk of chronic obstructive pulmonary disease (COPD).

Although the current research on uncured meats is  preliminary it does underscore the fact that both cured and uncured meats are probably best left as a minimal part of the diet, if they are eaten at all.

Antibiotic residues in 'uncured' sausages such as chorizo, pepperoni and salami may kill friendly bacteria that keeps the meat fresh