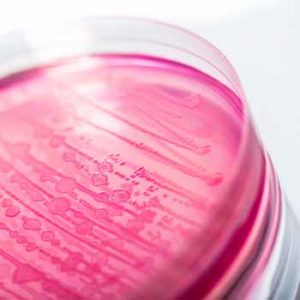 Routine antibiotics given to livestock can create resistant bacteria which can easily get into the human food chain. [Photo: Bigstock]

The research found soaring levels of resistance in chicken meat, with 24% of samples testing positive for ESBL E. coli, a type of E. coli resistant to the ‘critically important’ modern cephalosporin antibiotics. This is four times higher than was found during a similar study in 2015, in which just 6% of chicken tested positive for ESBL E. coli. Modern cephalosporins are widely used for treating life-threatening E.coli blood poisoning in humans.

» Overuse of antibiotics on the farm can contribute to the growth of resistant types of bacteria.

» E.coli is implicated in urinary-tract and blood-poisoning infections in people and due to resistance to antibiotics these infections are becoming increasingly hard to treat.

» Overuse of antibiotics used to mass medicate livestock on British farms is likely to be undermining the health and well-being of humans, say the researchers.

A staggering 51% of the E. coli from pork and poultry samples were resistant to the antibiotic trimethoprim, which is used to treat over half of lower urinary-tract infections. In addition, 19% of the E. coli were resistant to gentamicin, a very important human antibiotic used to treat more serious upper urinary-tract infections.

The study, commissioned by the Alliance to Save our Antibiotics and carried out by scientists at Cambridge University, looked at 189 UK-origin pig and poultry meat samples from the seven largest supermarkets in the UK (ASDA, Aldi, Coop, Morrisons, Sainsbury’s, Tesco and Waitrose).

It tested for the presence of E. coli which are resistant to the key antibiotics for treating E. coli urinary-tract and blood-poisoning infections in people. The highly resistant ESBL E. coli was found on meat from all of the supermarkets.

The findings provide further evidence that the overuse of antibiotics used to mass medicate livestock on British farms is likely to be undermining the treatment of E. coli urinary-tract and blood-poisoning infections in humans. Some of the antibiotics tested are used in far greater quantities in livestock farming than in human medicine.

This is important because scientists have proven that the use of a veterinary aminoglycoside called apramycin is very likely to have contributed to gentamicin resistance in human E. coli infections. [See studies here and here].

Emma Rose of the Alliance to Save our Antibiotics said: “These findings show the level of antibiotic resistance on retail meat to be worse than expected. Supermarkets must now publicly commit to polices which prohibit the routine mass-medication of groups of healthy animals, and take immediate steps to reduce farm use of the ‘Critically Important’ drugs.”

Dr Mark Holmes, from Cambridge University, who led the study said: “I’m concerned that insufficient resources are being put into the surveillance of antibiotic resistance in farm animals and retail meat. We don’t know if these levels are rising or falling in the absence of an effective monitoring system. These results highlight the need for improvements in antibiotic stewardship in veterinary medicine. While some progress has been made we must not be complacent as it may take many years before we see significant reductions in the numbers of antibiotic-resistant bacteria found in farms.”

E-coli is by far the most common cause of urinary-tract infections and of dangerous blood poisoning, and can also cause meningitis. These infections must be treated with antibiotics.

Figures compiled by the Alliance from official data (acquired through Freedom of Information requests to submitted to Public Health England, Northern Ireland’s Public Health Agency, Public Health Wales and Health Protection Scotland) show that the number of E. coli blood-poisoning infections has been increasing for the past 25 years and reached a record 45,666 in 2015.

The increase is partly being driven by increasing resistance to key antibiotics in urinary-tract infections, resulting in more treatment failures and in some cases the development of serious blood-poisoning infections. No new antibiotics have been discovered for treating E. coli for 35 years.

Routine use on the farm

The overuse of antibiotics in human medicine is part of the problem, but increasing scientific evidence from a wide range of studies shows that the routine dosing of animals on intensive farms raised in disease-inducing conditions, is also an important contributor.

Dr Ron Daniels BEM, CEO of the UK Sepsis Trust said: “This study highlights a worrying trend towards rising resistance in E.coli on UK retail meat. E.coli in people is the greatest cause of deaths from sepsis, and poor antimicrobial stewardship in intensive farming is undoubtedly contributing to this trend. It’s of paramount importance that we act decisively to reduce this immediate threat to human life.”

The Alliance has raised the issue of farm-antibiotic use with all major retailers over the last few years, and has seen positive progress from Waitrose, who in 2015 stated that antibiotics would not be used for routine prophylaxis within its supply chains.

In August 2016, Waitrose updated their policy to also state that they are working towards significant year on year reductions in usage of all antibiotics, and have pledged to end the use of all CIAs as soon as possible.

In response to the testing, the Alliance is calling for similar action from all UK supermarkets to tackle the use of antibiotics in their supply chains, by banning the routine preventative mass-medication of groups of animals, and dramatically curbing farm-use of the ‘critically important’ antibiotics. The global network Avaaz has also launched a petition calling for urgent action.

Philip Lymbery, Compassion in World Farming’s CEO, said: “This new study reveals our worst fears: without a drastic change in the over-use of antibiotics on factory farms, we could be facing a post-antibiotic era. We must no longer sacrifice animal welfare for the sake of producing cheap meat.”

Peter Melchett, policy director at the Soil Association said: “These results show how vital it is to encourage farming systems that keep animals healthy without abusing medicines that are crucial to human health. Organic farmers have been doing this successfully for years. Supermarkets must act to protect public health and support farmers to change their farming systems.”

Routine antibiotics given to livestock can create resistant bacteria which can easily get into the human food chain. [Photo: Bigstock]