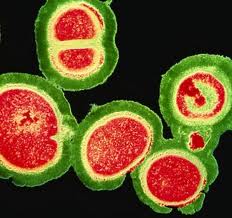 Resistant Staphylococcus bacteria can pass easily from livestock to humans

Natural Health News — People who live near livestock or in livestock farming communities may be at greater risk of acquiring, Methicillin-resistant Staphylococcus aureus (MRSA), according to a new study led by an international team of researchers.

A joint project from the Johns Hopkins Bloomberg School of Public Health, the Dutch Institute for Public Health and the Environment (RIVM) and VU University Medical Center in Amsterdam, compared livestock density, place of residence and existing information on risk factors found that regional density of livestock is an important risk factor for nasal carriage of livestock-associated (LA) MRSA for persons with and without direct contact with livestock.

The results are featured in the upcoming edition of Emerging Infectious Diseases.

In this study the researchers found that as the density of veal calves, pigs, or cattle doubles in a specific area, the odds of carrying LA-MRSA increases between 24% and 77%, depending on the animal.

“These results challenge us to understand how these exposures could be occurring,” said Beth Feingold, PhD, MPH, MESc, lead author of the study, Bloomberg School of Public Health graduate and the Glenadore and Howard L. Pim Postdoctoral Fellow in Global Change at the Johns Hopkins Zanvyl Krieger School of Arts and Sciences.

Staphylococcus aureus is a pathogen that can cause a range of illnesses in humans, from minor to life-threatening skin, bloodstream, respiratory, urinary and surgical site infections.

According to the Centers for Disease Control and Prevention, MRSA is a type of staph bacteria that is resistant to penicillin and certain first-line antibiotics called beta-lactams. MRSA infections are most commonly infections of the skin.Though nasal carriage, the indicator used in this study, does not indicate that someone is infected with MRSA, it is associated with increased risks of eventual infection and with increase risk of spreading the bacterium to others.

“In the past, MRSA has been largely associated with hospitals and other health care facilities, but in the last decade the majority of infections have been acquired in the community outside of a health care setting,” said Ellen Silbergeld, PhD, co-author of the study and a professor with the Bloomberg School of Public Health’s Department of Environmental Health Sciences.

Communities at risk – even if they don’t live near livestock

This study is the first to suggest the importance of indirect routes of transmission of livestock-associated MRSA.

“In the Netherlands LA-MRSA was first found in 2003 and was initially almost exclusively found in persons with direct contact to livestock. In recent years LA-MRSA is found with increasing frequency in community-dwelling individuals with no known contact with livestock. It is important to determine the routes of transmission outside of the farms since this may have important consequences for public health.”

The authors conclude that the study may also have serious implications for individuals living in the U.S. due to the sheer volume of pig farms in this country. “Swine production is a significant industry in the Netherlands, but its density and scale are much less than in the United States. Future work should investigate the relationship between intensive livestock operations in the US and exposures to drug-resistant microbes including MRSA,” said Ellen Silbergeld.

Resistant Staphylococcus bacteria can pass easily from livestock to humans