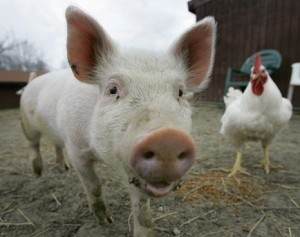 Natural Health News — Some MRSA bugs in UK hospitals can be traced back to a type of bacteria found in farm animals, a study suggests.

A strain of drug-resistant bacteria carried by some livestock – the MRSA strain Staphylococcus aureus CC398 – has also been found in patients, researchers say.

People and animals generally harbour distinct variants of CC398, which the team say evolved from the same original bacteria. However, the CC398 strain found in livestock can be transmitted to humans, and the study shows that this has happened on many occasions.

The study,  published in the journal Applied and Environmental Microbiology, provides new evidence that the livestock-associated CC398 strain could spread in hospitals, including those with newborn babies.

CC398 from farm animals is resistant to some common antibiotic drugs, which could make it harder to treat. The strain’s enhanced drug resistance in livestock is likely to be the result of widespread use of antibiotics on farms, scientists say.

Patients in hospitals and nursing homes are at increased risk of MRSA infection, but healthy people in the wider community can also become infected with some strains.

Scientists at the University of Edinburgh studied how the CC398 strain evolved using a state-of-the-art genetic analysis technique. For the first time, researchers unravelled the full genetic code of CC398 strains from the UK, and compared these with published genetic data on CC398 bugs from humans and livestock around the world.

They say that CC398 has entered the UK on several occasions since the mid-1940s, though the original source of the bacteria remains unclear.

Lead researcher Dr Melissa Ward said: “Our findings emphasize the need for strict biosecurity practices in the food production industry, as well as continued surveillance and infection control of MRSA in hospitals. Responsible use of antibiotics in healthcare settings and agriculture is of utmost importance.”