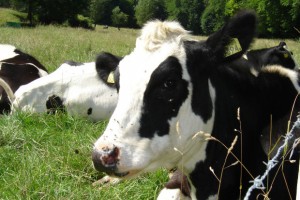 [image: by mactabbie ~ via MorgueFile]

Researchers  at the University of Cambridge have identified the new strain of methicillin-resistant Staphylococcus aureus (MRSA) in milk from dairy cows. The discovery was made accidentally while the scientists were researching the bacterium’s role in bovine mastitis (a bacterial infection which occurs in the cows’ udders).

The new strain’s genetic makeup differs greatly from previous strains, which means that current tests used to identify MRSA are not able detect this new strain.

Subsequent blood tests in Scotland, England and Denmark found this strain of MRSA in humans as well. It has since been identified in people in Ireland and Germany.

Workers on dairy farms may be at higher risk of carrying MRSA, but it is not yet known if this translates into a higher risk of infection. In the wider UK population around 1% of individuals carry MRSA – typically in their noses – without becoming ill.

The new research raises questions about whether cows could be a reservoir for the new strains of MRSA and new research is being undertaken to investigate this to look for further new MRSA strains, and to explore the potential risks of the new strain to farm workers.

Lead investigator Dr Mark Holmes noted: “Although there is circumstantial evidence that dairy cows are providing a reservoir of infection, it is still not known for certain if cows are infecting people, or people are infecting cows.

The research findings are published in the journal The Lancet Infectious Diseases.

In related news excessive use of antibiotics in livestock has been shown to promote resistance and, according to researchers from the National Food Institute in Denmark risks the future health of both animals and humans.

Nearly half of all antibiotics produced in the world are used on farm animals. Resistant bacteria can spread from animals to humans, mainly through the food chain. The scientists note that three of four recently emerging infections in humans have originated from livestock: avian influenza H5N1, severe acute respiratory syndrome (SARS), and Salmonella.

Since then, the recent outbreak of resistant E.coli Europe has also been traced to German bean sprouts grown on farms where manure is used as fertiliser. E.coli is prevalent in the guts of factory farmed cattle and present in their faeces.

[image: by mactabbie ~ via MorgueFile]