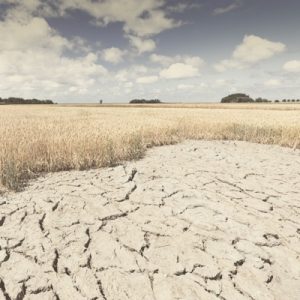 Agriculture is both a key contributor to climate change and one of the sectors most vulnerable to those changes. [Photo: Bigstock]

What will we eat in the future?

What was once an rhetorical musing has now become the critical question of our time as scientists grapple with tricky questions about life—and larders—in a climate-changing world.

Agriculture is both a key contributor to climate change and one of the sectors most vulnerable to those changes. That fact alone should send an urgent message that the way we farm has to change.

Instead, what we’re witnessing is a stubborn cadre of policymakers, tech companies and big agribusinesses that believe that business as usual can be maintained with a just a few tweaks to the system. But the science is telling a different story.

Earlier this year a report from the United Nations Intergovernmental Panel on Climate Change (IPCC) warned that the world’s land and water resources are being exploited at “unprecedented rates,” and that topsoil is disappearing 10-100 times faster than we can replenish it.

As climate change begins to bite and we experience floods, drought, storms and other types of extreme weather that deeply disrupt the global food supply, feeding ourselves is going to get harder.

Some of the world‘s most vulnerable places are already bearing witness to these effects. After decades of decline, world hunger and malnutrition has, since 2014, begun to climb steadily again. By 2050 the effects of climate change will be responsible for 529,000 additional and avoidable deaths.

If you ever doubted that farming and food is a climate change issue, the rapidly mounting science is begging you not to doubt it anymore. Consider the studies published just this year:

The University of Minnesota-led study quoted above found that climate change is reducing consumable food calories by around 1 percent yearly for the top 10 global crops. This may sound small, but it actually represents some 35 trillion calories each year—enough to provide more than 50 million people with a daily diet of over 1,800 calories—the level that the UN Food and Agriculture Organization says is essential to avoid food deprivation or undernourishment.

These figures are so staggering it’s hard to wrap our heads around just what they mean for the foods our families consume every day.

Most of us understand the world in terms of food not crop yields. So apart from those top 10 staple crops—which are often incorporated as ingredients in a variety of everyday foods such as ready meals, bakery items and snacks—what other food favorites are starting to feel the climate squeeze?

Today, disruptions in the food supply chain can be found almost everywhere food is grown. The sheer scale of it is almost too much to take in, and for some it is paralyzing.

But regenerative farmers and ranchers are taking action.

They are rebuilding soil organic matter, restoring degraded soil biodiversity, improving the carbon-storage capacity of the land, diversifying their crops, planting varieties that are hardy and resilient.

Regenerative farmers and ranchers are reducing the use of energy-intensive chemical add-ons, including fertilizers and pesticides, making use of cover crops, crop rotations, compost and animal manures. They’re grazing and pasturing animals on grass and raising them in more naturalistic conditions.

Regenerative farmers and ranchers are thinking systemically. They’re moving beyond headline-grabbing techno-fixes like GMOs and synthetic biology to solutions that acknowledge the deeply interconnected nature of farming and the need to think and act systemically.

The choices we make now will decide what we can eat in the future. If we stay on our current path, doubling down on intensive, wasteful, polluting industrial farming, we may have no choice but to accept a world where farmers don’t matter and where we survive on a grim diet of techno-burgers, ultraprocessed GMO snacks and fake foods grown in industrial vats.

But change the rules of the game and our choices begin to multiply.

It may not be possible to stop all the effects of climate change. We’ve let it go on for too long without addressing its biggest core causes: energy generation, industry and transport. But by acting on a new vision for food and farming, in line with the goals of the Green New Deal, we can begin to mitigate the worst of it and work with the rest to ensure a more stable future for everyone.

The farmers who are undertaking this task, including those who are members of the U.S. Farmers & Ranchers for a Green New Deal, are real climate heroes. We should be doing everything we can to support them.

Agriculture is both a key contributor to climate change and one of the sectors most vulnerable to those changes. [Photo: Bigstock]