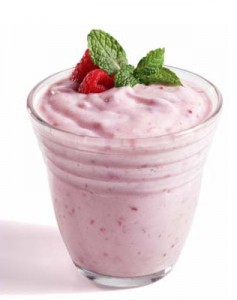 Canadian and Tanzanian researchers created and distributed a special yoghurt containing Lactobacillus rhamnosus bacteria and observed the outcomes against a control group.

The work, published the journal in mBio, the online open-access journal of the American Society for Microbiology, was focused on how microbes could protect against environmental health damage in poor parts of the world.

Their lab research indicated that L. rhamnosus had a great affinity for binding toxic heavy metals. Working with this knowledge, the team hypothesized that regularly consuming this probiotic strain could prevent metals from being absorbed from the diet.

Working with the Western Heads East organization, Dr. Reid had already established a network of community kitchens in Mwanza, Tanzania to produce a probiotic yoghurt for the local population.

Mwanza is located on the shores of Lake Victoria, which is known to be polluted with pesticides and toxic metals including mercury. The team utilized this network to produce and distribute a new type of yoghurt containing L. rhamnosus. The special yoghurt was distributed to a group of pregnant women and a group of children. The researchers measured the baseline and post-yoghurt levels of toxic metals.

The team found a significant protective effect of the probiotic against mercury and arsenic in the pregnant women. This is important as “reduction in these compounds in the mothers could presumably decrease negative developmental effects in their fetus and newborns,” according to Dr. Reid. While the results obtained in the children studied showed benefits and lower toxin levels, the sample size and duration of treatment did not allow statistical significance.

The researchers were excited by the potential of basic foodstuffs to provide preventative protection for pregnant women worldwide. They are currently investigating lactobacilli with higher and even more specific mechanisms of sequestering mercury.