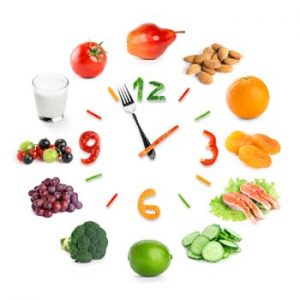 Eating and drinking at unaccustomed times can leave you feeling as bad as if you are jet lagged. [Image: Bigstock]

Natural Health News — If your heading back to work today feeling sluggish and slightly fuzzy headed, you’re not alone.

People who are jet-lagged, people who work graveyard shifts and habitual late-night snackers know just how you feel.

All these activities upset the body’s “food clock,” a collection of interacting genes and molecules known technically as the ‘food-entrainable oscillator’, a mouthful of a name for the system that keeps the human body on a metabolic even keel.

Look behind the face of a mechanical clock and you will see a dizzying array of cogs, flywheels, reciprocating counterbalances and other moving parts. Our biological clocks, say scientists, are equally complex, composed of multiple interacting genes that turn on or off in an orchestrated way to keep time during the day.

Now a new study by researchers at the University of California, San Francisco (UCSF) has revealed some of the inner workings of this clock at the molecular level.

Published this month in the journal Proceedings of the National Academy of Sciences, the study showed that normal laboratory mice given food only during their regular sleeping hours will adjust their food clock over time and begin to wake up from their slumber, and run around in anticipation of their new mealtime. But mice lacking the PKCγ gene are not able to respond to changes in their meal time – instead sleeping right through it.

Scientists have long known that the food clock can be reset over time if an organism changes its eating patterns, eating to excess or at odd times, since the timing of the food clock is linked to ancient impulses that prompt us to eat during the prime foraging and hunting hours in the day. But until now, very little was known about how the food clock works on a genetic level.

What this latest study has found is a molecular basis for this phenomenon: the PKCγ protein binds to another molecule called BMAL and stabilizes it, which shifts the clock in time.

Body and mind work together

In most organisms, biological clockworks are governed by a master clock, referred to as the “circadian oscillator,” which keeps track of time and coordinates our biological processes with the rhythm of a 24-hour cycle of day and night.

All life forms – mice and mustard greens and humans – have these master clocks.

In the last decade or so, scientists have uncovered many of their inner workings, uncovering many of the genes whose cycles are tied to the clock and discovering how in mammals it is controlled by a tiny spot in the brain known as the “superchiasmatic nucleus.”

Scientists also know that in addition to the master clock, our bodies have other clocks operating in parallel throughout the day. One of these is the food clock, which is not tied to one specific spot in the brain but rather multiple sites throughout the body.

The food clock is there to help our bodies make the most of our nutritional intake. It controls genes that help in everything from the absorption of nutrients in our digestive tract to their dispersal through the bloodstream, and it is designed to anticipate our eating patterns.

Even before we eat a meal, our bodies begin to turn on some of these genes and turn off others, preparing for the burst of sustenance – which is why we feel the pangs of hunger just as the lunch hour arrives.

A better understanding of disease

This latest study, say the researchers, has implications for understanding the molecular basis of diabetes, obesity and other metabolic syndromes because a desynchronised food clock could be a contributing factor to these diseases, said lead researcher Louis Ptacek, MD, the John C Coleman Distinguished Professor of Neurology at UCSF and a Howard Hughes Medical Institute Investigator.

It may also help explain why night owls are more likely to be obese than morning larks, he said.

This micro level of understanding of our food clocks might not help you lose that holiday weight-gain more quickly, but it does have implications for treating certain health conditions.

“Understanding the molecular mechanism of how eating at the “wrong” time of the day desynchronises the clocks in our body can facilitate the development of better treatments for disorders associated with night-eating syndrome, shift work and jet lag,” said Ptacek.

Eating and drinking at unaccustomed times can leave you feeling as bad as if you are jet lagged. [Image: Bigstock]