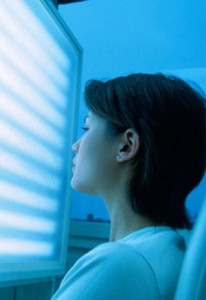 Sufferers also report poor sleep and having less energy to participate in daily activities. The result is that just getting through the day can be much more taxing than usual.

The small preliminary study group comprised 18 individuals with a documented history of at least one concussion and sleep disturbance that either emerged or was aggravated with the most recent injury.

All participants underwent magnetic resonance imaging (MRI) and comprehensive psychiatric and neuropsychological assessments before and after the intervention.

The participants were randomised into groups that received  treatment with blue light or a ‘placebo’ amber light.

Results show that six weeks of morning bright light therapy (30 minutes each day) resulted in a marked decrease in subjective daytime sleepiness. The light used was in the blue wavelength This improvement was further associated with improvements in the propensity to fall asleep and nighttime sleep quality. Bright light therapy also improved depressive symptoms as well as attention, speed of information processing, memory and executive functioning (i.e. managing time and attention, the ability to plan and organise etc).

The research abstract was published recently in an online supplement of the journal SLEEP ahead of this weeks SLEEP 2013, the 27th annual meeting of the Associated Professional Sleep Societies LLC.

Better sleep is vital to healing

According to the authors, it has been estimated that at least 50%t of individuals with
concussion experience some kind of sleep disturbance at some point following their injury, and sleep has been demonstrated to be essential for brain plasticity and may be important for recovery.

Blue light therapy is also known as bright light therapy and has proved helpful in treating mood disorders such as Seasonal Affective Disorder (SAD) and even major depression. It has been shown that  blue light also worked better than red light in treating SAD symptoms.

Other studies have found that blue light can help  strengthen and stimulate connections between areas of the brain that process emotion and language.