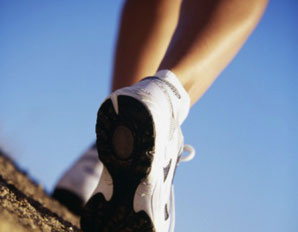 Get off the treadmill - literally! - and out into the fresh air.

Natural Health News — Regular exercise in a natural environment may cut the risk of suffering from poor mental health by half, according to a new study.

Previous experimental studies have shown that exercise in natural environments has a positive effect on biomarkers (substances produced by the body) and self-reported feelings of stress, on mood and reported levels of fatigue.

The observational study published in the journal Social Science & Medicine, was designed to look at whether such effects can be detected in the general population in every day settings.

It’s not that the gym drives you crazy, but…

The researchers took data from the Scottish Health Survey 2008, which described the different environments in which 1890 people were physically active. These included woodlands, parks, swimming pools, the gym, the streets and the home.

Only activity in natural environments was associated with a lower risk of poor mental health.

Lead researcher, Professor Richard Mitchell of the Centre for Research on Environment, Society and Health, said: “I wasn’t surprised by the findings that exercise in natural environments is good for your mental health, but I was surprised by just how much better it is for your mental health to exercise in a green place like a forest, than in other places like the gym.

Woodlands and parks are better

The study revealed that local pavements or streets was the environment most commonly used regularly for physical activity, followed by home/garden. Around 50% of the sampled group reported using any natural environment at least once in the last month.

Says Mitchell: “Woodlands and parks seemed to have the greatest effect, so the message to doctors, planners and policy makers is that these places need protecting and promoting.

“The results suggest that making the decision to exercise in a natural environment just once a week could be enough to gain a benefit. Any additional use may have a bigger effect.”

The researchers were unable to record the type, duration or intensity of activity conducted in each environment and noted that this was a weakness in the study but was an area that could be looked at in more detail in future.

The research was funded by the Scottish Government’s Rural and Environmental Science and Analytical Services division (RESAS).

Good for teens too

In a similar study, Australia researchers found that teens who engaged in more moderate-to-vigorous outdoor activity reported better health and social functioning than their peers who spent hours in front of television and computer screens.

The research, done at the University of Sydney, found that youths in the study overall spent an average of 3.3 hours a day playing video games, watching television or doing other sedentary activities, compared with only 2.1 hours in physical activity.

The findings published in the journal Pediatrics suggest that parents need to limit how much time their children spend using electronic media, the lead author said.

“Parents should be conscious of the fact that outdoor physical activity is beneficial to their child’s overall health and well-being, and should try to limit the time their child spends in front of the screen,” said lead researcher  Bamini Gopinath, a senior research fellow at the university’s Westmead Millennium Institute for Medical Research.

Get off the treadmill - literally! - and out into the fresh air.