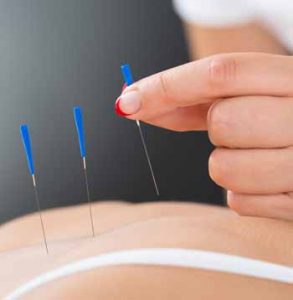 New evidence shows that acupuncture can help with both chronic pain and depression. [Photo: Bigstock]

Natural Health News — New research shows that acupuncture treatment is effective on its own and can also can boost the effectiveness of standard medical care, lessening the severity of chronic pain and depression.

In an analysis published in the National Institute for Health Research (NIHR) Journals Library, the researchers showed that there is significant evidence to demonstrate that acupuncture provides more than a placebo effect.

Working with a team of scientists from the US, the University of York researchers brought together the results of 29 high quality clinical trials focused on patients treated with acupuncture and/or standard medical care.

» Healthcare providers admit to being uncertain whether they should provide wider access to acupuncture.

» A new analysis of existing trials shows that, compared to standard medical care, acupuncture significantly reduced the number of headaches and migraine attacks and reduced the severity of neck and lower back pain, among other complaints.

» There is also evidence that acupuncture treatment may also have benefits for those suffering from depression.

» The researchers suggest that healthcare providers should consider acupuncture as an effective supportive, and in some cases stand alone, treatment.

The results shows that the addition of acupuncture compared to standard medical care alone significantly reduced the number of headaches and migraine attacks and reduced the severity of neck and lower back pain. It also showed that acupuncture reduced the pain and disability of osteoarthritis, which led to patients being less reliant on anti-inflammatory tablets to control pain.

Professor Hugh MacPherson, Professor of Acupuncture Research in the University of York’s Department of Health Sciences, said: “There has been an increase in practitioners using acupuncture as an intervention. Approximately four million acupuncture treatments are provided a year in the UK, but the evidence to show how clinically effective this form of treatment is has been limited.”

“Our aim was to bring together data from high quality clinical trials and provide a robust evidence base that will help reduce this uncertainty and support commissioners and health professionals in making informed decisions backed up with research.”

The authors also concluded that acupuncture is cost effective, with the value for money being rated as less than the threshold of £20,000 cost per quality of life year – a metric for cost-effectiveness used by the UK’s National Institute for Health and Care Excellence (NICE).

Significantly, the team  note that in a study of 755 patients with depression, compared to antidepressants, those receiving acupuncture or counselling fared better and the improvements were largely sustained for up to 12 months after treatment.

Professor MacPherson said: “The front-line treatment for depression in primary care usually involves antidepressants; however, they do not work well for more than half of patients.

“In the largest study of its kind, we have now provided a solid evidence base to show that not only can acupuncture and counselling bring patients out of an episode of depression, but it can keep the condition at bay for up to a year on average.”

The researchers believe that their analysis provides definitive evidence that when acupuncture is used to treat chronic pain, the reductions in pain are substantially more than those measured from sham (placebo) acupuncture, which involves inserting needles at the ‘wrong’ locations, or using non-inserted needles (fake needles) at the correct locations.

Sham acupuncture is only used in clinical trials for comparative purposes, to help assess the effectiveness of true acupuncture.

Professor MacPherson added: “Our new data provides a significant step forward in treating chronic pain and managing depression, because patients and health professionals can now make decisions on acupuncture with more confidence. Not only is it more cost effective, but it reduces pain levels and improves mood levels, which could reduce over reliance on drugs that can sometimes result in unwanted side effects.”

New evidence shows that acupuncture can help with both chronic pain and depression. [Photo: Bigstock]