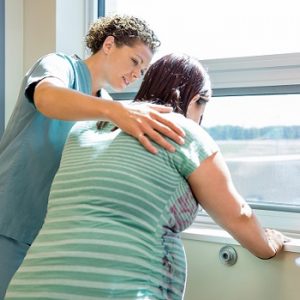 Women in labour are using the same energy it takes to run a marathon, but are often routinely denied food. [Photo: Bigstock]

Women in labour need to eat!

Natural Health News — Most healthy women can forget the fasting and, in fact, would benefit from eating a light meal during labour, suggests new research.

Women traditionally have been told to avoid eating or drinking during labour due ‘just in case’ they need emergency care with  a general anesthetic – which raises the risk they may aspirate, or inhale liquid or food into their lungs, which can cause pneumonia.

But when researchers reviewed the literature of hundreds of studies on the topic, published in 1990 or later, they determined that withholding food and liquids may be unnecessary for most women in labour.

» Labouring women in hospitals around the world are routinely told they cannot have food, as a precaution against vomiting and aspiration should they require a general anaesthetic.

» A new analysis suggests this practice has no basis in evidence. Researchers assessing hundreds of studies over many years say aspiration is a non-existent risk.

» Labouring women are expending energy equivalent to a marathon runner, and if they wish to eat they should.

The researchers found that aspiration today is almost nonexistent, especially in healthy patients. In the United States, there was only one case of aspiration associated with labour and delivery between 2005 and 2013, involving a complicated case of a woman who was obese and had pre-eclampsia (a precursor to eclampsia, or high blood pressure that can lead to seizures).

Presenting their findings at the Anesthisiology 2015 annual meeting, they also noted that no cases of death due to aspiration were reported in the United Kingdom between 2000 and 2005, compared to 1.5 cases per 1,000 during the 1940s. They say this is likely due to advances in anesthesia care, including increased use of epidurals and spinal blocks in place of providing anesthesia through a mask over the nose and mouth.

Labouring mums are running a marathon

Importantly, the energy and caloric demands of labouring women are similar to those of marathon runners, Harty said. Without adequate nutrition, women’s bodies will begin to use fat as an energy source, increasing acidity of the blood in the mother and infant, potentially reducing uterine contractions and leading to longer labour and lower health scores in newborns.

Additionally, the studies suggest that fasting can cause emotional stress, potentially moving blood away from the uterus and placenta, lengthening labour and contributing to distress of the fetus.

It should also be noted that genuine emergencies, of the type which have long been used to justify the withholding of food from labouring women, are also very rare.

Most women lose their appetites during very active labour, but can continue to drink fluids such as water and clear juices. However healthy women who are not at risk for aspiration should have a light meal if they want one. This could include could include fruit, light soups, eggs, toast, light sandwiches (no large slices of meat), juice and water.

Women in labour are using the same energy it takes to run a marathon, but are often routinely denied food. [Photo: Bigstock]