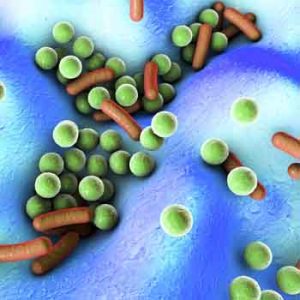 Scientists are only just beginning to understand the relationship between skin flora and health. [Image: Bigstock]

Natural Health News − Your skin is covered with many different kinds of bacteria – but what most of us don’t know is that even the ones we think are bad for us may be doing some good.

Researchers at the University of Sweden have shown that the most common type of bacteria on human skin – Propionibacterium acnes – secretes a protein which protects us from the reactive oxygen species thought to contribute to several skin diseases.

The protein secreted by this bacterium – which is also associated with acne – has an equally strong effect on free radicals as beneficial antioxidants such as vitamin C and vitamin E.

“The name [Propionibacterium acnes] originates from the fact that the bacterium was first discovered on a patient with severe acne. But whether it causes acne is uncertain – it may have been present merely because it is so common,” says Rolf Lood at the Department of Clinical Sciences in Lund.

» Skin is covered in many different types of bacteria and we are only just beginning to understand the relationship between the normal flora of the skin and health.

» Swedish scientists have discovered that the same bacterium that is associated with acne also produces an enzyme that can protect skin from free radical damage as effectively as vitamins C and E.

» Further research will reveal if this enzyme can be incorporated into skin and sun care products.

In a laboratory study published in Scientific Reports, Lood has discovered that the ‘acne bacterium’ secretes a protein called RoxP. This protein protects against what is known as oxidative stress, a condition in which reactive oxygen species damage cells. A common cause of oxidative stress on the skin is UV radiation from the sun.

“This protein is important for the bacterium’s very survival on our skin. The bacterium improves its living environment by secreting RoxP, but in doing so it also benefits us,” explains Lood.

Oxidative stress is considered to be a contributing factor in several skin diseases, including atopic dermatitis, psoriasis and skin cancer. It is also a factor in premature skin ageing.

Propionibacterium acnes is so common that it is present in both healthy individuals and people with skin diseases. According to Lood, however, people have different amounts of the bacterium on their skin, and it can also produce more or less of the protective protein RoxP.

It’s early days yet, but Lood says that a human study is in the pipeline that will compare patients with basal cell carcinoma, a pre-cancerous condition called actinic keratosis and a healthy control group to discover whether there is any connection between these conditions and the amount of RoxP on a person’s skin.

If these results are positive, says Lood, they could lead to the inclusion of RoxP in sunscreens and its use in the treatment of psoriasis and atopic dermatitis

Scientists are only just beginning to understand the relationship between skin flora and health. [Image: Bigstock]