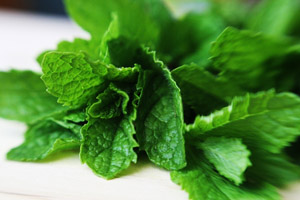 Mint is easy to grow, wherever you live, and easy to use in foods and health preparations

With a unique aroma, refreshing flavour, cooling sensation and a host of medicinal qualities – from settling the stomach to lifting the spirit and soothing the skin – mint is among the most versatile plants in the herbal kingdom.

There are around 25 different species of mint, many of which cross-pollinate to produce variable hybrids. The two most popular varieties for medicinal purposes are peppermint (Mentha piperita) – which is actually a natural hybrid cross between Mentha aquatica (water mint) and Mentha spicata (spearmint).

They are relatively easy to tell apart since peppermint has greenish-purple lance-shaped leaves while the rounder leaves of spearmint are more of a greyish green colour.

The taste of both is similar – sometimes described as a cross between pepper and chlorophyll – with peppermint being a bit stronger and spearmint being a little more cool and subtle.

Peppermint in particular is widely cultivates for its oil, which is used in flavourings and to scent perfumes and toiletries.

In Greek mythology mint was originally a nymph called Minthe, who was transformed into a plant by Persephone, who was jealous of the of the way Minthe had attracted the roving eye of her husband Pluto. Pluto tried but could not reverse the spell that his wife cast. So instead gave Minthe a sweet smell, so when she was walked upon in the garden, her aroma would delight the senses.

Today it’s a delightful staple of Middle Eastern, Mediterranean and Indian cooking where it is used to flavour meat dishes, stuffed vegetables, rice dishes, sauces and salsas or the fresh leaves are simple brewed as a pleasant tea

Many of the traditional uses for mint hold true to day and peppermint is by far the most widely studied variety.

It is, amongst other things, a digestive tonic, analgesic, antiseptic , diaphoretic (promotes sweating) and a carminative (prevents or relieves flatulence). This translates into a variety of uses in treating digestive problems, heartburn, nausea, abdominal pains, headache, and coughs. As one group of researchers said it’s more than just an after dinner mint.

Irritable bowel syndrome (IBS) is a relatively common condition characterised by abdominal distension and pain, bloating, flatulence, and diarrhoea. Due to the success of peppermint oil in treating traditional GI tract ailments, many recent studies have been conducted to test its efficacy in treating IBS.

In 2007 a small double-blind placebo-controlled randomised trial was performed on 57 patients with IBS ranging in age from 18 to 80 years old. Both the peppermint oil and placebo were prepared in enteric-coated capsules, containing 225mg of their respective substances, two of which were given randomly to each patient twice a day for 4 weeks.

In another small trial peppermint oil (90 mg) and caraway oil (50 mg) in an enteric-coated capsule, was studied in 45 patients with non-ulcerous dyspepsia. After four weeks both the intensity of pain and the global clinical impression were significantly improved for more than 90% of those taking the essential oil combination.

Peppermint oil may also be useful for post-operative nausea.

Peppermint oil has long been recognised as a safe and effective treatment for tension headaches.

In one randomised, placebo-controlled, double-blind crossover study, peppermint oil was pitted against Paracetamol (acetaminophen) and placebo in the treatment of headaches.

The peppermint preparation contained 10 g of peppermint oil and ethanol (90%); the placebo was a 90% ethanol solution to which traces of peppermint oil were added. Both were applied across the forehead and to the temples using a sponge. The acetaminophen dose was 500mg.

Amongst patients aged 16-45 the 10% peppermint oil solution had a comparable pain relieving effect to paracetamol and in addition is was shown to be effective in reducing emotional irritation, depression, and feeling of apathy.

For migraine (without aura) 10% peppermint solution can help can reduce or eliminate pain in nearly 40%of users and that the pain free effect was long lasting.

Research published in 2001 in found that inhalation of peppermint lived up to its nickname of ‘breath of the gods’ by increasing athletic performance. Volunteer runners finished the 400-metre dash faster, had significant strength (determined by hand grip), and could complete more push-ups after inhaling peppermint oil.

A 2003 study found that peppermint improved productivity in office workers. Participants showed marked improvement in a card-sorting task as well as in typing accuracy and typing speed. According to the researchers, “These results suggest peppermint odour may promote a general arousal of attention, so participants stay focused on their task and increase performance.”

Diluted peppermint oil has cooling and toning effects on the skin and can be particularly soothing for irritated skin. Applying peppermint oil in a 20%-strength solution to skin can relieve symptoms of hives, poison ivy and poison oak.

Peppermint’s viricidal properties may make it useful in treating cold sores, even those that involve resistant strains of the herpes simplex virus.

Like all the best herbs it’s easy to grow in gardens, in pots and on windowsills, and easy to use in a variety of different ways to enhance the flavour of your food and aid health and well being. Try these suggestions:

Or if you are feeling more ambitious try our wonderful recipe for a Mint & Cucumber Lemonade here.

Mint is easy to grow, wherever you live, and easy to use in foods and health preparations