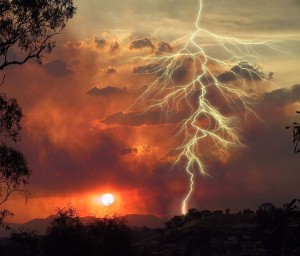 Changing weather has been linked to symptoms such as mood swings, depression and fatigue [Image: Scott Bear - Wikimedia Commons]

Must be the weather

It may not feel like it when you are sitting in an air-conditioned office or a centrally heated home, but we humans are creatures of nature.

Our bodies evolved exposed to nature’s rhythms and extremes and in many ways they are still very primitive in the way they respond to external stresses.

In a world where so many of us are concerned about keeping healthy, understanding something about how the weather affects us provides us with yet another tool to help maintain our well-being.

While modern western medicine has been slow to catch up with the weather-health link, the influence of the weather is considered vital to the understanding of human health in many ancient healthcare systems such as traditional Chinese and Indian medicine (known as Ayurveda).

When you visit a homoeopath your practitioner will take into account, among other things, if certain weather conditions make a disorder better or worse and select their remedies accordingly.

In some parts of Europe, weather is widely acknowledged as a contributing factor in many and varied health conditions. German physicians regularly consult daily weather bulletins to help them advise patients how to manage problems such as headaches and asthma.

In the UK the official weather agency, the Met Office, is working with the health service to help hospitals better predict how many patients they will have to treat.  In the US both the Weather Channel and Intellicast.com have features on their internet sites about how the weather can affected health.

So it is slowly getting into our consciousness that there is more to health than germs and genetics.

We still don’t know everything there is to know about what makes some people more sensitive to shifts in weather than others, but there are certain things that conspire to make us more weather sensitive.

Women, for instance, appear to be more affected than men. No one knows why but it could be because of their more complex hormonal make-up. The elderly, the chronically ill tend to suffer more, and children too seem to be much more sensitive than adults.

One thing we do know is that the more changeable the weather is the more likely it is that weather sensitive people will respond to it. That is why many weather related health problems occur in the changeable seasons such as spring and autumn as well as in extremes of heat and cold.  Difficulty in adjusting to changes in weather may also have become more exaggerated as our indoor environments have become much more predictable. The lighting, the temperature of our houses often stays the same day in and day out.  Someone who spends lots of time indoors, may find exposure to the more unpredictable outdoor environment more challenging.

In the most sensitive individuals, practically no part of the body remains unaffected and the most common symptoms of weather sensitivity can include:

These kinds of reactions stem largely from weather’s influence on the hormonal and nervous systems, both of which help regulate body function. These systems respond to what’s going on in our internal environment – for instance are we stressed, in pain, or hungry; but they also respond to what’s going on in our external environment, for instance whether we are cold or hot, or whether it is light or dark outside.

One good example of an extreme reaction to weather and seasons is Seasonal Affective Disorder (SAD), or winter depression.  It tends to start during the autumn and gets worse as winter draws in. it also affects women more than men. People suffering from SAD experience symptoms of fatigue, carbohydrate craving, overeating, weight gain and oversleeping on top of the emotional experience of depression. It can make it impossible to function on a day to day basis because you feel so tired and uninterested in life. The closest most of us can get to understanding how SAD sufferers feel is when we suffer from severe jet lag. Imagine having to do everything you have to do in a day, while being chronically jet lagged!

Studies show that these kinds of symptoms are common to all of us to some extent in autumn and winter. But sufferers of SAD are experiencing then in a very extreme way, and yet they have a complete absence of these symptoms in the summer.

SAD is also significantly more common in northern regions where daylight hours are generally shorter. In fact the nearer you live to the North Pole the more common it is.

SAD sufferers have unusually high levels of melatonin – a hormone that tells the body when to sleep. Most of us only produce melatonin at night when it’s dark, but SAD are more sensitive to the darker days of winter and tend to go on producing it during the day.

Other examples of people who are extremely affected and in some cases severely disabled by the weather include people who suffer from migraines.  Most of have experienced static electricity on windy days. This static electricity is caused by an overabundance of molecules carrying a positive electrical charge, known as positive ions.

Scientists have discovered that warm winds in particular create more of these positive ions.  In some sensitive people this can trigger changes in blood flow and hormone levels that can lead to migraines. In others it can lead to quite severe asthma attacks.

Another extreme affect is the way that suicide rates increase in the spring. This is thought to be due to sharp spikes in another hormone serotonin. Too much of this hormone can cause extreme anxiety and feelings of agitation and hopelessness and lack of impulse control and in the most sensitive individuals – particularly if they already have some underlying mental illness, this can lead to suicide.

By tracking how the weather affects you can begin to take precautions. For instance some people have been able to avoid these problems by making use of new technology.

The cure for SAD is daylight and many sufferers find relief by using light boxes that simulate daylight. For people suffering from migraine, installing a ioniser – which generates negative ions – restores the normal electrical balance of the environment and can help fend off the worst effects of windy days.

For most of us the affects of weather are more subtle. We all have days where we seem to lack concentration or focus, where we are accident prone, where our joints or scars ache, or we cant’ sleep, or where we have tension type headaches that seem to come out of nowhere.

It’s worth looking to the weather when this happens, in fact these kinds of problems are the basis for the notion of being ‘under the weather’.

Very hot or stormy weather can cause problems like this. In hot weather for instance, the body produces hormones that increase anxiety, impair judgement and reduce concentration. Thus it can be harder to work productively in over-heated environments, and incidents of road rage and accidents are also more common in hot weather.

The electrical changes in the atmosphere just before a storm hits can cause scar tissue to itch or twinge. That is because even if we don’t perceive it our skin responds – contracts and expands – in response to changes in temperature and the amount of moisture in the air. Scar tissue contract and expands at a different rate than normal skin, which is why the weather affects it this way.

Arthritis sufferers can predict storms because of the way that changes in atmospheric pressure and humidity before a storm affect cause the body to release substances that increase inflammation.

Even if you don’t notice or aren’t bothered by the way your body respond to weather changes, objective testing will show that most of us do respond to the weather at a biochemical level.

That means our blood and hormone levels are constantly adjusting to what’s going on outside. Whether we notice it or not our skin, nose, eyes, nervous system, lungs, membranes and muscles respond to a greater or lesser extent to the weight of the atmosphere, the friction caused by the wind against our skin, the balance of water vapour in the air and changes of temperature, light and electricity in the air.

The sun or the absence of sun regulates the release of hormones that dictate our sleep-wake patterns. This is also the time of year when, for instance, people begin to feel hungrier and less satisfied by a meal that would have left them full in the summer.

Studies show that in the autumn our energy intake, especially from carbohydrates, can increase by around 222 calories per day. Basically our primitive bodies are stocking up for the winter.

Likewise, whether they know it or not, most people’s cholesterol levels go up in the winter – and it doesn’t matter whether we are talking about a Minnesota winter or a California winter. When the temperature you are used to goes down, your cholesterol goes up.

Whether or not you respond or are aware of this change, may have more to do with how healthy you are in general. The healthier you are the less likely you will be knocked off kilter why weather extremes.

But just like some people are more aware of their own intuition and emotions or the emotional responses of others, some people are naturally more in touch with the effects of weather on their general sense of well being.

It may also be that those least affected by weather changes may be those whose lifestyles naturally allow them to follow the seasons. For instance those who live a more rural lifestyle.

You don’t have to be at the mercy of the weather all the time. For instance, keeping warm in the winter is largely a process of adaptation. Most of us heat our homes and offices much too high. In the dead of winter the stark experience of going from a highly heated home or office to cold outdoor weather is not good for you, and is especially hard on the heart. It can also trigger asthma attacks and dampen immunity.

People who exercise regularly also don’t seem to feel the cold as much as sedentary people – and they get fewer colds in the winter. Exercise helps circulation, but it also helps combat problems that make us feel the cold more, such as diabetes and atherosclerosis.

Also be careful of drinking heavily in the dead of winter. Alcohol may make you feel warm initially but it will very quickly reduce your core body temperature and cause your blood vessels to dilate. This sends more blood to the skin where it cools rapidly lowering your body temperature further.

Changing weather has been linked to symptoms such as mood swings, depression and fatigue [Image: Scott Bear - Wikimedia Commons]