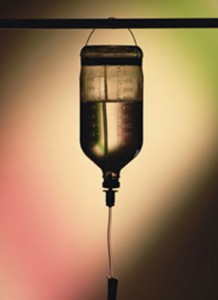 Q&A: What is chelation?

Q — I’m interested in knowing more about chelation and whether it can remove harmful toxins from the body. Can you explain a bit more about it?

A — Chelation (pronounced key-lay-shun) therapy uses a variety of substances to remove toxic metals from the body. These substances bind to metals like lead, cadmium and arsenic, as well as other toxic substances, and help remove them from the body. Chelation therapy is extensively documented in the medical literature, and is recognised as a legitimate treatment for lead poisoning. It has also been used to reverse hardening of the arteries.

The body does have its own natural chelation processes – digestion, assimilation, transport of food nutrients, and the formation of enzymes and hormones – as well as its own detoxification channels. However, when the amount of metal in the body becomes too high for the body to deal with by itself, chelation may be necessary.

The most well-known chelator is EDTA (ethylenediaminetetraacetic acid), an amino acid that is generally administered via an intravenous solution.

EDTA binds to calcium deposits in the arteries and is used in cases of atherosclerosis, where it has a more than 80% success rate. It can also remove lead (but not mercury) from the body.

Not an easy answer

Intravenous EDTA is a an uncomfortable process and probably best reserved for those whose bodies are very polluted and who need urgent detoxification.

Although non-toxic, EDTA can produce side-effects in some people. These include burning, redness and swelling at the injection site, fever, hypotension (low blood pressure), joint pain, skin outbreaks or rashes, upset stomach and, rarely, irritation of the kidneys and liver.

People who very are debilitated, emaciated, have weak or diseased kidneys, or advanced cardiovascular disease (end stage) are probably not good candidates for intravenous chelation as a sudden, massive infusion of EDTA may put too much stress on the kidneys, liver and detoxification pathways in these individuals. However, there are some therapists that dispute this and say that professionally administered chelation poses little threat.

Stronger metal chelators such as DMPS or DMSA should only be used under a doctor’s supervision and are even outlawed in some places.

It’s worth remembering also that in addition to removing toxic heavy metals, there is a chance that chelation regimes could remove beneficial minerals and trace elements as well. All these possibilities should be discussed with your practitioner.

Oral chelation using nutritional food supplements containing chelating agents (such as EDTA, but also numerous natural chelators such as vitamins, minerals, amino acids, antioxidants, phytonutrients and herbs) can also be effective, but will be a slower process.

This is because only 4-18 % of an oral EDTA dose is absorbed (compared with 100% of an intravenous dose).

Nevertheless, some oral chelation formulas have the ability to chemically bond with and bring about the elimination of mercury and other metals from the body. The addition of vitamins, minerals, enzymes and antioxidants may make oral chelation a less harmful process and more supportive of the body. While taking chelators, you should do all that you can to support the body and avoid unnecessary sources of toxins.

If you are worried about toxic metal accumulation in your body there are other things you can do.

Begin by understanding what your risk, if any, of heavy metal overload is. There are a number of tests you can undergo to check levels of metals and other poisons in your body. Hair analysis, which usually involves taking a small sample of recent hair growth from the nape of the neck, is a common way of testing for the presence of heavy metals.

A lab analysis can give you fairly accurate information on the presence of calcium, magnesium, sodium, potassium, iron, copper, manganese, zinc, chromium and selenium, but also potentially more damaging metals such as lead, mercury, cadmium and arsenic.

There are also several things you can do to aid your body’s natural detoxification pathways. Food, as always, plays a major part.

A high-fibre diet in general is useful for trapping toxins and assisting in the elimination of heavy metals. Fibre helps reduce intestinal permeability, sometimes known as leaky gut – a condition that can lead to allergies and toxic build-up in the bloodstream. Consider adding water-soluble, mucilaginous fibres such as psyllium seeds and flaxseeds to your diet. These can be ground up, and added to cereals, soups and baked foods

All leafy dark-green vegetables, especially cruciferous vegetables (belonging to the cabbage family), can inhibit the carcinogenic effects of chemicals. Try to include plenty of kale, spinach, broccoli and brussels sprouts in your diet. Other green foods that contain chlorophyll are also natural chelators that can draw heavy metals out of the system.  Herbs like cilantro (coriander) are a good choice. A good way to take your greens is to buy a juicer and use it to make vegetable juices – they are not as sweet as fruit juices, but they pack more punch in the detox stakes.

The pectin found in apple and pear seeds can block the absorption of toxins while aiding detoxification. Try making apples or pears stewed with their seeds a regular feature of your diet.

Try seaweeds. Seaweeds and alginates can also bind to heavy metals.  These can be taken as supplements or added to your diet.

Use a water filter. No home-filter process is infallible and there are benefits and limitations in every type of water you choose to drink. As a general recommendation, for the best-quality water, consider installing a reverse-osmosis filter on your own tap (but be careful since some of these use plastic filters, which can leach chemicals into your drinking water). Reverse-osmosis however is very wasteful of water (a waste that is becoming increasingly hard to justify as this natural resource  becomes increasingly scarce). Distilled water is pure, but may be lacking in certain minerals. Jug-type water filters have to do what they claim on the label; this means they filter out a substantial amount of contaminants such as chlorine and heavy metals. Make sure you change the filter regularly to avoid bacterial build-up.

Have a regular sauna. Dry or steam saunas heat the body tissues several inches below the skin, enhancing all your metabolic processes. When all of your skin’s sweat glands are working well, they can perform as much detoxification as one (or both) kidneys. Increased sweating increases the elimination of salt and water through the skin as well as of metals (such as nickel, copper, zinc and lead), toxic volatile hydrocarbons (including benzene, styrene, toluene, trichloroethylene and PCBs), pesticides (such as DDT and DDE) and other toxins.