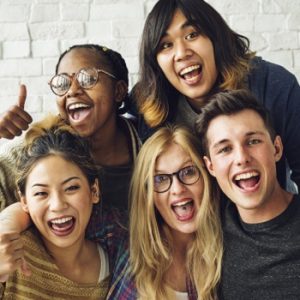 The more we engage in extroverted and outgoing behaviour the happier we are, according to a new study. [Photo: Bigstock]

If you want to be happy… act happy

Natural Health News — Happy is as happy does, it seems – for human beings all over the world.

A cross cultural study, published in the Journal of Research in Personality, has found that the more we engage in outgoing behaviour the more it leads to more positive moods.

“We are not the first to show that being more extroverted in daily behaviour can lead to more positive moods. However, we are probably the first to extend this finding to a variety of cultures,” said lead researcher Timothy Church, professor of counselling psychology and associate dean of research in the College of Education at Washington State University.

Previous US studies, have shown that introverts experience greater levels of happiness when they engage in extroverted behaviours – like smiling at a passer-by or calling an old friend.

Intrigued, Church wanted to see if the findings held true for non-Western cultures as well.

Happiness… is a bell curve

They also looked at what Church calls the Big Five personality traits translate across cultures. Those traits are

Each of the Big Five traits lies on a bell curve of characteristics that ranges from one extreme to the other. Extroversion lies on the opposite pole from introversion, for example, and agreeableness on the opposite side of antagonism. On a day-to-day basis, most people land somewhere in the middle.

What they found was that across the board, people reported more positive emotions in daily situations where they also felt or acted more extroverted.

A second finding revealed that the students felt more extroverted, agreeable, conscientious, emotionally stable and open to experience in situations where they could choose their own behaviour, rather than being constrained by outside pressures.

“Cross-cultural psychologists like to talk about psychic unity,” Church said. “Despite all of our cultural differences, the way personality is organized seems to be pretty comparable across cultural groups. There is evidence to show that 40-50% of the variation in personality traits has a genetic basis.”

Although we all have these traits in common, psychologists have found that cultures may vary in the average expression of these traits. For example, some cultures may appear more gregarious or conscientious than others.

But Homo sapiens, whether in Europe, China or South America, does seem to place a very high value on happiness. A quick Internet search reveals an abundance of advice on how to find and keep the elusive joy.

There’s good reason for that. A comprehensive study from the University of Illinois in 2011 found that happy people tend to live longer and experience better health than their gloomy peers. Positive moods help reduce stress levels and promote healthy immune function. They even shorten the heart’s recovery time after a workout.

Church’s findings suggest that being more outgoing may be one way to increase happiness levels in most, if not all, cultures.

A couple of caveats apply to this study. One is that Church only surveyed students. What constitutes ‘happy’ in other age groups may not be the same.

The other is that in this study also found that people are more able to engage in upbeat behaviour when they feel free to be themselves. The authors do not say what effect if any forcing yourself to be happy when you are genuinely and legitimately sad might have on overall happiness levels.

Science may still have some explaining to do. In the mean time, try to be happy when you can.

The more we engage in extroverted and outgoing behaviour the happier we are, according to a new study. [Photo: Bigstock]