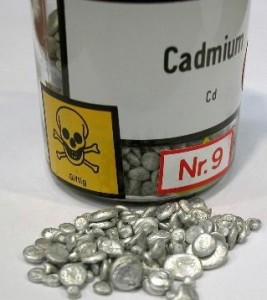 The toxic metal cadmium is associated with premature ageing and disease

Feeling old? Cadmium exposure could be to blame

Natural Health News — High exposure to the toxic metal cadmium prematurely ages cells, triggering a number of diseases as people age, according to a new study.

Researchers at George Washington University looked at the metal cadmium and found that higher human exposure can lead to significantly shorter telomeres, bits of DNA at the ends of chromosomes that are associated with cardiovascular disease, diabetes and other diseases of old age.

The study, which was published in the American Journal of Epidemiology, is the largest-ever to look at cadmium exposure and telomeres.

Telomeres are bits of DNA at the ends of chromosomes which ‘protect’ the genetic code. Although their disease-regulating properties aren’t fully understood, previous studies have associated shortened telomeres are associated with several disease states, as well as cell ageing, while longer telomeres are thought to be protective

“We looked at heavy metals in this study and found a strong association between exposure to low levels of cadmium and telomere shortening,” says Ami Zota, ScD, MS, an assistant professor of environmental and occupational health at Milken Institute SPH.

“Our findings suggest that cadmium exposure can cause premature aging of cells. And they add to other evidence indicating this heavy metal can get into the bloodstream and trigger kidney disease and other health problems.”

The World Health Organization calls environmental exposure to cadmium a “major public health concern,” and notes this heavy metal has been associated with cardiovascular disease, respiratory problems, cancer and other serious diseases.

People typically are exposed to small amounts of this toxic metal by inhaling tobacco smoke, eating fruits and vegetables grown in contaminated soil or living near an industrial site, according to Zota. Cadmium also has a number of industrial uses – from batteries to paint and indeed has found it’s way into our water courses via nickel-cadmium batteries dumped into landfill.

In this large study, Zota and her colleagues looked at blood and urine samples taken from more than 6,700 adults who participated in the National Health and Nutrition Examination Survey (NHANES) from 1999 to 2002, a nationally representative health survey of the US population.

Adds 11 years to your cell age

“People with the highest cadmium exposure had cells that looked on average 11 years older than their chronological age,” Zota said, adding that even people in the highest group of exposure still had very tiny amounts of metal in their bloodstream. “This study adds to evidence suggesting that no level of exposure to this metal is safe.”

Normal wear and tear on the telomeres leads to shortening as people get older. But other factors, including cadmium, may speed up that process. When the telomeres get too short, the cell can no longer divide and chronic diseases can be the result.

The findings of this study suggest that cadmium can elicit harmful effects on the human body at levels well below the current safety standards set by environmental and occupational safety agencies.  Such findings suggest that public health officials may need to accelerate the efforts to reduce the contamination of the environment – so that people are protected from even trace amounts of this metal, Zota notes.

The World Health Organization says global efforts to reduce exposure to this metal are urgently needed in order to protect the public health. Because tobacco smoke releases cadmium into the air WHO recommends a ban on smoking in public places.

The group also suggests that governments worldwide promote better ways of disposing batteries and other measures to prevent contamination of the environment. Interventions should be aimed at protecting the most vulnerable, such as minority or low-income populations, who are often disproportionately exposed.

For non-smokers, food is generally the largest source of cadmium exposure, Zota says. Cadmium levels in some foods can be increased due to the application of phosphate fertilizers or sludge that is applied to farm fields.

Many other studies have linked exposure to cadmium to a host of health problems but this is one of the first to suggest it can shorten telomeres and set people up for premature aging, Zota says.

The toxic metal cadmium is associated with premature ageing and disease