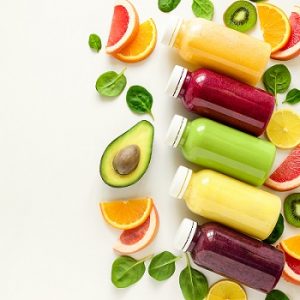 Fruit and vegetable juices contain a variety of beneficial substances that can feed good bacteria in the gut which are associated with healthy metabolism. [Photo: Bigstock]

Natural Health News — Juice-based mini-fasts are becoming popular – but do they really do anything for your health?

The fact is there is very little human research out there to guide us, which is why a new study from China is so welcome.

Fruit and vegetables are rich sources of several biologically active components – such as polyphenols, oligosaccharides, fibre and nitrate – that contribute to general health and decrease the risk of chronic diseases such as cardiovascular disease as food for good bacterial in the gut.

The polyphenols in fruit and vegetable juices exert a variety of physiological effects including antioxidative, immunomodulatory and antimicrobial activities. They also act as food for good bacteria in the gut. The same is true for fibre.

The two most abundant bacterial in the human gut are Firmicutes (40–60%) and Bacteroidetes (20–40%) along with lower levels of Actinobacteria, Fusobacteria, Proteobacteria and Verrucomicrobia.

Recent studies show that dietary interventions with polyphenol rich extracts and foods – including dealcoholized red wine polyphenols, cocoa-derived flavanols, quercetin and grape anthocyanins – can alter this bacterial balance decreasing the abundance of Firmicutes and increasing Bifidobacteria, Lactobacillus and Verrucomicrobia, which is also a key difference in the gut microbiota between overweight and lean individuals.

For this study published in the journal Nature Scientific Reports, the scientists asked 20 healthy adults to consume only vegetable/fruit juices for 3 days followed by 14 days of customary diet.

The juice fast resulted in a significant decrease in weight and body mass index by day for and this weight loss was still evidence by day 17. Levels of nitric oxide in the blood -important for healthy arteries and blood flow – increased.

Also on day 4 the proportion of the Firmicutes and Proteobacteria in stool was significantly decreased while Bacteroidetes and Cyanobacteria had been found to increase compared to levels at the beginning of the study. However by the end of the study these had mostly reverted back to what they were at the start.

The only other human study investigating the effect of juice based diet on changes in the gut microbiota observed changes in the stool microbiome in participants following a traditional program in an Austrian Monastery including a small amount of cereal, vegetable, fruit and herbal tea.

It too found that after one week of the program an increase in microbial diversity was observed as well as the abundance of Akkermansia and Bifidobacteria was increased and the abundance of Enterobacteria and Lactobacilli was decreased.

While more research is needed, the scientists conclude that “the 3-day vegetable/fruit juice-based diet induced significant changes in the intestinal microbiota which were associated with weight loss.”

Is there a ’best juice?

In a separate study researchers, also from China, reviewed evidence for the health benefits of different juices. They found:

Fruit and vegetable juices contain a variety of beneficial substances that can feed good bacteria in the gut which are associated with healthy metabolism. [Photo: Bigstock]