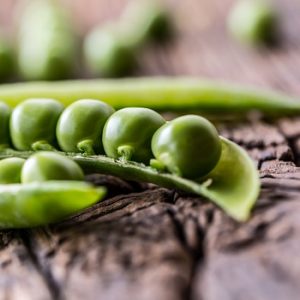 The researchers from Washington State University note that there is increasing evidence showing that Western dietary and lifestyle habits contribute to an increased prevalence of inflammatory bowel diseases (IBD), such as ulcerative colitis and Crohn’s disease, by inducing intestinal inflammation.

It also contributes to rising rates of obesity – a risk factor for the development of inflammatory bowel disease.

Although peas contain a variety of beneficial nutrients including beneficial fibre, known to decrease the risk of IBD there is a widespread low awareness of the beneficial effects of green pea in many countries, say those behind a new study.

With this in mind the scientists investigated the preventive effects of green pea supplementation on colitis in mice fed a Western-style diet.

» Western style eating has been shown to raise the risk obesity and inflammatory bowel disease.

» Peas are high in nutrients and co-factors missing from the standard Western diet, and which are known to support gut health.

» A high fat diet supplemented with peas significantly improved the health of mice with colitis, speeding their recovery, stabilising their weight, reducing inflammation and aiding the body’s ability to absorb vital nutrients.

» Other human evidence suggests legumes, for instance in Mediterranean diets, can benefit IBD.

Colitis was induced in the mice after seven weeks of dietary supplementation. Immediately after this both groups showed similar adverse reactions, but fairly quickly the mice fed green peas proved to be more resilient.

The results, published in the journal Nutrients, showed they also recovered also faster than mice that didn’t eat green peas, their body weight was more stable and there was a significant reduction in faecal blood leading. This led the researchers to conclude that green peas in the diet reduced inflammation and mucosal loss and improved what is known as, ‘endoplasmic reticulum signalling’ – a process necessary for, amongst other things, helping the body to utilise calcium and fats better.

The study was not able to pinpoint whether there was a specific component of green peas that was helpful. The researchers speculate that green peas – but also other legumes such as chickpeas, kidney beans – likely contain multiple factors including dietary fibre, resistant starches, protein, and antioxidants that work together to reduce inflammation and encourage healthy bacteria in the gut, thus supporting intestinal health.

There is no single diet which has been proved to work ‘best’ for IBD. But other research does suggest that in humans, diets rich in legumes – as well as cereals, fruits, vegetables, nuts, seeds and healthy fats –  such as the Mediterranean diet, may be protective against IBD.

“I think it is very significant. People who are having problems with intestinal health can use peas in their diet,” said Dr Shima Bibi, lead researcher behind the study.