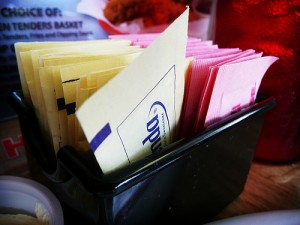 Inflammatory bowel disease is an umbrella term that includes both ulcerative colitis and Crohn’s disease and levels of these disease have sky-rocketed in recent years. Global use of the sweetener sucralose has also grown exponentially in the last decade. But it was first marketed in Canada in 1991 as a sweetener in breakfast cereals, soft drinks, deserts, toppings, fillings, chewing gum, breath mints, fruit spreads, salad dressings, sweets,  puddings, bakery products and more.

In a letter to the Canadian Journal of Gastorenterology Dr Xiaofa Qin cites studies showing that sucralose inhibits gut bacteria and suggests that this may be the reason for the rise.

Sucralose has been approved by more than 60 regulatory bodies throughout the world, and is in thousands of products worldwide. However, even as the US Food and Drug Administration (FDA) was approving the sweetener, it noted that several of the studies that the manufacturers used to prove its safety were “inconclusive” or were “insufficient” to draw firm conclusions from.

Clastogenic, genotoxic and mutagenic substances are all potential risk factors in the development of cancer.

At mid to high doses, FDA reviewers found that there was a trend towards “decreasing white blood cell and lymphocyte counts with increasing dose levels of sucralose” – in other words the more that was consumed the more it affected immunity.

This latest theory about sucralose adds to long-term concerns expressed by health campaigners, that it was never tested fully for human safety before being put on the marketplace (see here for a review).