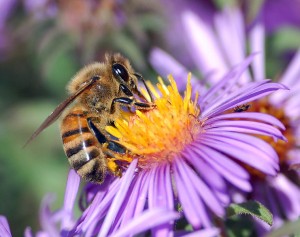 Bees and other pollinators keep our diets healthy

The healthiest fruits and vegetables – the ones that supply the highest levels of vitamins and minerals to the human diet – depend heavily on bees and other pollinating animals, says a new study,

The joint study by California and German scientists estimated that up to 40% of to some essential nutrients provided by fruits and vegetables could be lost without pollinators.

The researchers noted that globally, “animal-pollinated crops contain the majority of the available dietary lipid, vitamin A, C and E, and a large portion of the minerals calcium, fluoride, and iron worldwide. The yield increase attributable to animal-dependent pollination of these crops is significant and could have a potentially drastic effect on human nutrition if jeopardised.”

More specifically, the team showed that in the global crop supply, several key vitamins and other nutrients related to lower risk for cancer and heart disease are present predominantly in crops propagated by pollinators. These include the carotenoids lycopene and beta-cryptoxanthin, which are found in brightly coloured red, orange and yellow fruits and vegetables.

Other important antioxidants, including several forms of vitamin E and more than 90% of the available vitamin C, are provided by crops that are pollinated by bees and other animals.

Key minerals for the development of bones and teeth, including more than 50% of calcium and fluoride available in the global food supply, are present in crops produced with pollinators. Plant sources of calcium, such as sesame seed, almond or spinach, are particularly important in regions of the world where dairy production is often not culturally, environmentally or financially feasible.

Bees and other animal pollinators are experiencing declines in many parts of the globe. Many farmers around the world depend on the European honey bee, importing them seasonally to pollinate their fields.

However, the European honey bee has suffered massive overwintering losses, proposed causes of which include disease, pesticides and lack of nutritional (floral) resources.

Wild pollinators that provide pollination services “for free” are also declining rapidly as habitat is destroyed by intensive farming practices such as agrochemical-based monoculture. The results of this study demonstrate the potential impact of this pollinator decline on human health.