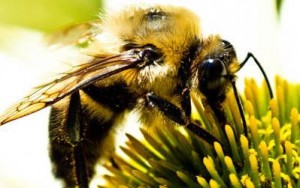 Bees are cherished icons of the British countryside, our parks and gardens

Fifty years on from Rachel Carson’s Silent Spring heightened interest in the effect of chemicals on nature is fitting if not unexpected.

It’s not as though those of us with concerns have needed to stir up the issue much – the scientists have done that for us.

Since March a stream of studies has fuelled doubts about the current crop of chemicals and the way they are approved for use.

The end of Her Majesty’s Jubilee year sees her Government facing both ways – saying things are okay yet admitting safety tests exist for the Queen’s honey bees but not for the rest of the insect world.

In March the journal, Science, published two independent studies – one French, one British.

The University of Stirling looked at how low (sub lethal) doses of neonicotinoid chemicals appear to lead to large (85%) declines in the number of Queen Bumble bees (Bombus terrestris) emerging from the nest. No queens? Not much point…

Mickaël Henry’s French team examined chemicals’ effect on the ability of foraging honey bees to find their way home to the hive. In the age of Sat-Nav, bees losing their navigation skills and homing instincts seems like interference with nature on a grand scale.

In April 2011, Dr Pettis told MPs that, “My own view is that pesticides are one of the issues confronting pollinators, but not the driving issue.”

But now he said: “Three or four years ago, I was more cautious about how much pesticides were contributing to the problem (of bee health and decline). Now more and more evidence points to pesticides being a consistent part of the problem.”

‘…we will absolutely look at the University of Stirling work, the French work, and the American work that came out a couple of months ago [a study by Dr Jeffrey Pettis, which showed that exposure to microscopic doses of neonicitinoids weakened bees’ resistance to disease].

He added: ‘We must look at this in real detail to see whether or not the current British position is correct or is incorrect… I want this all reassessed, very very carefully. We cannot simply say the situation is fine without fully analysing these papers and looking at the evidence and comparing it with previous evidence. Defra must look very seriously at all of these papers with a very open mind as to whether they will or will not change current policy. We need to get on top of this quickly, because bee health is a very serious issue.”

So there you have it. Roll on the review…

In August, before the review had reported, Syngenta’s Head of Product Safety, Dr Phil Botham wrote to The Independent dismissing links between chemicals and bee decline:

“…the objectively assessed facts point away from plant protection products being the dominant causal factor.”

We are not saying chemicals are the ‘dominant causal factor’. We are saying there’s enough doubt and lack of proper testing – especially of the effect of products on wild bees and other pollinators before they hit the market – to say chemical exposure compounds the other causes of bee decline.

On 18 September, the Government released its neonics review with a short statement saying that:

In short, the review admits that the Government does not know the effect of chemicals on wild bees when it approves products. But neonicotinoids still have a clean bill of health, for now.

The Guardian’s Damian Carrington said the review was an ‘illustrative tale of how science is used and abused in government policy making’.

Given the importance of bees to our economy, our environment and our food security – which the Government now seems to agree – a cautious approach would be to suspend their use until the full research is complete and the testing regime made robust.

A bad year for the bees

Meanwhile as I say in my latest blog bees have been under the weather as winter drought turned into deluge keeping bees indoors and facing starvation.

I designed The Bee Cause campaign to draw a line under the plight of the bee. It’s been a hit with the public and politicians of all persuasions are now taking an interest.

David Cameron has a golden chance to lead action to ensure bees recover and thrive. It’s time for a comprehensive British bee action plan tackling all causes of bee decline in one go.

Bees are cherished icons of the British countryside, our parks and gardens. Bees are the farmers’ friend helping pollinate our food crops and putting food on supermarket shelves. Does it make sense to put them out of business?

Bees are cherished icons of the British countryside, our parks and gardens