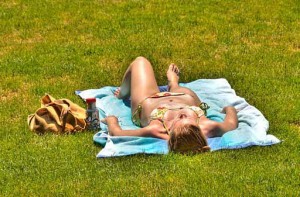 Chemicals in sunscreens linked to endometriosis

Natural Health News — Exposure to a compound commonly found in the sunscreens could increase the risk of developing endometriosis, say Canadian researchers.

In endometriosis, the lining of the uterus starts to grow into other tissues, often causing pain and infertility. The condition is difficult to diagnose, but it affects approximately 7-15% of women of reproductive-age women in the developed world. It is particularly common amongst infertile women.

Scientists have connected the condition to an excess of the hormone estrogen. Animal studies have found associations between the condition and compounds such as the environmental contaminants dioxins and polychlorinated biphenyls, which mimic estrogen’s effects.

Many everyday products including sunscreens, contain know hormone disrupters. Although no previous evidence tied sunscreens to endometriosis, the scientists knew that some benzophenones are estrogen mimics.

Their findings are published in the journal Environment Science and Technology.

The scientists collected urine samples from 625 women in Salt Lake City and San Francisco. There were two groups of women. One group of 494 women had sought medical care to schedule surgery to diagnose endometriosis.

The researchers compared those women to a control  group of women who matched the ages and areas of residence of the first group, but had not sought care for endometriosis.

Doctors gave this second group of women a pelvic magnetic resonance imaging scan to detect signs of the condition.

Before diagnosis, the researchers measured the women’s urine concentrations of the five benzophenone sunscreening agents.

In the control group, MRI scans could only detect advanced stages of endometriosis, nevertheless the scientists found a similar trend with the compound.

The study didn’t find a connection between the endomertiosis and any of the other four compounds.

Some of the benzophenones measured are more commonly found in plastics and paints to protect them from damage caused by UV rays.

In spite of this and it’s relatively small size, the study’s findings support increasing concerns that even small amounts of hormone disrupting chemicals can have profound effects on health.

All benzophenones are estrogenic so the fact that some in this study could not be linked specifically to endometriosis should not be taken as giving them a clean bill of health. In fact, several benzophenones feature on the International Chemical Secretariat’s Sin List of ‘substances of very high concern’ due to their hormone disrupting ability.

Since 2007, the Environmental Working Group’s (EWG) in the US has campaigned to raise awareness of the hormone disrupting potential of chemical sunscreens.

Its reports highlight mineral sunscreens such as zinc oxide and titanium dioxide as the safest kind of sunscreens. In EWG’s  Skin Deep Sunscreens 2011 guide products with zinc and titanium, sometimes called ‘mineral filters’, tend to highly for safety in EWG’s guide because they block harmful UV radiation without penetrating healthy skin.

Unlike other common sunscreen chemicals, zinc and titanium are not allergenic, do not break down in sunlight and do not disrupt the body’s natural hormones.

In the 1980s, mineral sunscreens made with these minerals were thick and pasty white. Today, sunscreen makers use microfine particles of between 20 and 200 nanometers in size to create lotions that are nearly clear and very effective.

EWG analysis indicates that consumers who use sunscreens without zinc and titanium are likely exposed to 20% more UVA radiation and greater numbers of hazardous ingredients than consumers relying on these mineral products for sun protection.