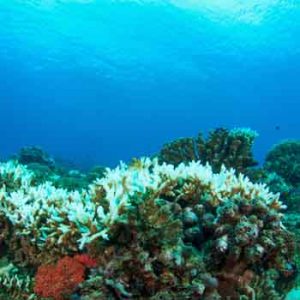 Popular sunscreening agents like oxybenzone can damage coral at key points in its lifecycle, causing bleaching and death. [Photo: Bigstock]

Natural Health News — If you are thinking about your sunny summer holidays, don’t forget to spare a thought for the environment.

Most of us look for high SPF sunscreens that will minimise the damage caused by long periods of sun exposure. But as we have previously reported many of the chemicals in sunscreens have hormone disrupting properties that could threaten human health.

Now legislators in Hawaii are seeking to ban the sunscreening chemicals oxybenzone and octinoxate in their state due to evidence of harm to the natural environment.

At the end of January the House Committee on Energy and Environmental Protection passed House Bill 600, introduced by Representative Nicole Lowen (District 6, Kailua-Kona, Holualoa). If the ban becomes law, sunscreens with these chemicals will no longer be on sale in Hawaii.

Whatever the outcome Hawaii’s war on oxybenzone has implications for legislation elsewhere in the US and the world.

In November 2015, a group of MEPs proposed a motion to ban oxybenzone in cosmetic products throughout the European Union. That legislation, however, did not progress. Should the Hawaiian bill become law, however, it is likely such calls will be renewed in Europe.

» A great deal of research now shows that oxybenzone in a hormone disrupter in humans but also in marine animals. In particular is linked to coral reef bleaching and death.

» Should the ban come into force products containing these ingredients will no longer be on sale in Hawaii – a move that could trigger similar band elsewhere in the US and the world.

Oxybenzone (also known as benzophenone-3 or BP3) is one of the most widely used UVA filters. In addition to blocking UVA, it also absorbs UVB and it is this quality that makes oxybenzone very attractive to cosmetics manufacturers. Today it can be found an over 3500 products worldwide, including  hairsprays, cosmetics and nail polishes as well sunscreen preparations.

In humans it is a known endocrine disrupter, but its potential for harm doesn’t stop there. The compound has been found entering the environment both through wastewater effluent and directly from swimmers wearing sunscreens. Each year, it is estimated that around 6,000 to 14,000 tonnes of sunscreen cream (or lotion) enters the world’s oceans.

Initial studies of oxybenzone in suntan products have indicated that it harms corals in the sensitive periods of their life cycle.

A 2008 study, for example, found that oxybenzone is likely to cause coral bleaching both in the lab and in the wild in several tropical regions. Other studies have suggested that oxybenzone also acts as an endocrine disruptor among marine creatures such as shrimps and clams.

In 2015 a study from a team of international scientists has found oxybenzone was highly toxic to juvenile corals and other marine life. In particular exposing the baby corals to oxybenzone damages their DNA and acts as an endocrine disruptor, which eventually cases them to die. The study also indicated oxybenzone induces coral bleaching.

Concentrations of the chemical in the waters around Hawaii were between 800 parts per trillion and 19 parts per billion, according to the study, and the lowest concentration to see toxicity effect is 62 parts per trillion. In plain English, that’s equivalent to one drop in 6.5 Olympic swimming pools.

In previous research, in some parts of Hawaii and the US Virgin Islands scientists have measured levels as high as 1,400,000 parts per trillion. That’s more than 20,000 times higher than known toxic levels.

“Regulatory decisions have to be made on sound scientific evidence and multiple studies. They have to be completed by different teams to provide a significant bundle of evidence. We are very far from it in this case.”

L’Oréal is, nevertheless, working on making sunscreen products without oxybenzone, in anticipation of a possible ban – or bans.

Popular sunscreening agents like oxybenzone can damage coral at key points in its lifecycle, causing bleaching and death. [Photo: Bigstock]