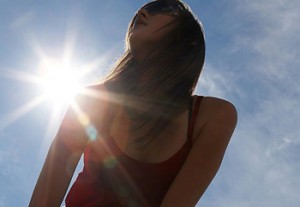 The researchers writing in the Annals of the Rheumatic Diseases say the effect was found only in older women,  possibly because younger women are more likely to have grown up in an era where sun exposure has been considered hazardous and where sunblocks have become the norm.

The findings are based on a large group of women who have participated in two phases of the famous Nurses Health Study. The first phase (NHS-I) tracked the health of more than 120,000 nurses from 1976, when they were aged between 30 and 55, until 2008.

Exposure was then estimated according to the US state of residence, and ranged from an annual average of 93 in Alaska and Oregon to 196 in Hawaii and Arizona. Likely estimates of UV exposure at birth and by the age of 15 were also included.

Rather than relying on simple geography to calculate likely levels of UVB exposure, the researchers used a more sensitive assessment, known as UVB flux, which is a composite measure of UVB radiation, based on latitude, altitude and cloud cover.

Over the study period, 1314 women developed rheumatoid arthritis. Among nurses in the first NHS cohort, higher cumulative exposure to UVB was associated with a reduced risk of developing the disease.

Those with the highest levels of exposure were 21% less likely to develop rheumatoid arthritis than those with the least, the analysis showed.

This backs up the findings of previous research showing a link between geography and the risk of rheumatoid arthritis as well as other autoimmune conditions such as type-1 diabetes, inflammatory bowel disease and multiple sclerosis.

In this study no such association for UVB exposure was found among the younger group of women in NHSII. Indeed the authors suggest that use of sunblock could lessen protective effects of sunlight.

“Differences in sun protective behaviours (eg greater use of sun block in younger generations) may explain the disparate results,” they explain.

They add that it is unclear at what stage of life the protective effect of UVB occurs. Many of the study participants didn’t move house between birth and adolescence, and there was no difference in the results for these time points.

The authors conclude: “Our study adds to the growing evidence that exposure to UVB light is associated with decreased risk of rheumatoid arthritis. The mechanisms are not yet understood, but could be mediated by the cutaneous production of vitamin D and attenuated by use of sunscreen or sun avoidance behaviour.”

UVB  makes up about 5% of the UV radiation reaching the earth’s surface. Overexposure is associated with, skin reddening, sunburn and damage to the skin’s more superficial epidermal layers. It plays a key role in tanning and, scientists believe, in the development of skin cancer. Its intensity varies by season, location, and time of day.

We need daily exposure sunlight – without sunblock – for our bodies to develop protective vitamin D. Indeed vitamin D deficiency has been linked to the development of rheumatoid arthritis and multiple other diseases. Getting the balance right is easier if you learn to rely on more than just sunblock for protection. For some good advice see our article Healthy habits in the sun.