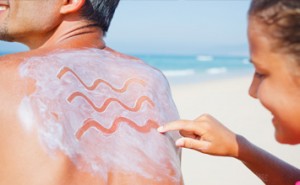 Many suncreams contain hormone disrupting chemicals - but how are these affecting men's reproductive health. [Photo: Bigstock]

Q – There have been stories in the press recently about sunscreen ingredients making men infertile. How true are these?

A – Stories – and studies – linking common cosmetic ingredients with male infertility have been around for a long time.

According to the current WHO guidelines a sample is classified as normal if the sperm concentration is 15 million per mill or more, the number of normal spermatozoa is 4% or more and more than 32% have good motility.

That said it is possible that a man with semen parameters at that level or lower may still father a child, while men with better semen quality may for whatever reason find producing a child difficult.

There seems to be a general agreement that sperm quality is declining and the current debate seems to have been fuelled by a 1992 meta-analysis showing that semen quality had decreased by 50% during a 50 years period.

Other studies followed, for instance one of 1351 fertile men (semen donors) in Paris found that the men’s sperm count decreased by 2.1% per year between1973 and 1992. Sperm motility also decreased in these individuals.

But not all men in all locations studied have experienced a decrease in sperm counts. The average sperm counts in 302 men in the Toulouse in France, for example, were unchanged over the period from 1977 to 1992 and their mean sperm count was significantly higher than observed in the Paris study.

Furthermore, it was reported that the highest sperm counts recorded in Finland were found in men from rural areas accompanied by a low incidence of testicular cancer.

This suggests that urban lifestyle or environmental factors could be an important factor in male infertility.

It’s against this kind of backdrop that Niels Jorgensen, a Danish researcher, has recently commented that while fatty food and a sedentary lifestyle can also have an effect, much of the blame lies with the cocktail of chemicals that surrounds us in everyday life.

Jorgensen was reporting on his analysis of more than 70 years of research on male fertility at a leading European conference calculates that just 25% of European men have good quality sperm. He believes that up to 15% of men would need fertility treatment if they want to start a family.

He detailed that perm counts have fallen by at least a quarter in Denmark since the 1940s. France, Spain and Finland have also seen drops. In Liverpool, counts halved between the 1930s and 1970s.

The Cosmetics, Toiletry and Perfumery Association, has responded to the allegations saying that there was no firm evidence linking cosmetic ingredient to male infertility.

But this isn’t necessarily true.

A range of chemicals present in products such as soap, toothpaste and plastic toys may be directly affecting sperm function in men, according to one 2014 study.

Another 2014 study of 501 couples that were trying to conceive a child by the US National Institutes of Health Researchers found that men with high exposure to benzophenone-type UV filters 2,2′,4,4′-tetrahydroxybenzophenone (BP-2) or 4-hydroxybenzophenone (4OH-BP) had a 30% reduction in fecundity, the biological ability to reproduce. Lower fecundity may result in a longer time to pregnancy.

Another study from earlier in 2014 in the journal Fertility and Sterility researchers assessed the concentrations of phthalates (which are also found in cosmetic formulations) and Bisphenol A (BPA) in couples trying to achieve pregnancy.

According to a review of recent scientific literature commissioned by the European Environment Agency (EEA) in 2012, endocrine disrupting chemicals found in food, pharmaceuticals, pesticides, household products and cosmetics have been linked to many health problems including declining male fertility.

So what can we do?

It’s hard to avoid all EDCs – some such as those present in water can be difficult to remove. But some things – such as your diet and the cosmetics and other products you buy – are in your control.

Manufacturers will argue that sunscreens only use a small amount of these hormone disrupting ingredients. But the problem is that with EDCs the dose doesn’t make the poison. The body only requires small amounts of reproductive hormones to produce an effect. Thus even small regular doses of such chemicals can have a big effect.

Sunscreen, used consciously is a helpful way to protect skin from the damaging effects of the sun. But of course nobody would recommend wearing sunscreen all day every day. Our article Healthy Habits in the Sun gives lots of useful advice on different ways to keep your skin healthy when the sun is shining.

Many suncreams contain hormone disrupting chemicals - but how are these affecting men's reproductive health. [Photo: Bigstock]