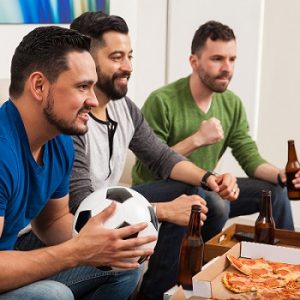 Men who eat more processed and packaged foods, and drink carbonated soft drinks, have higher levels of phthalates in their bodies. [Photo: Bigstock]

Natural Health News — In the world of toxic chemicals effects on women and children are usually the ones to grab the big headlines. But a new study highlights the risks that men face as well.

According to Australian researchers, men regularly exposed to chemicals found in everyday plastics materials are at a higher risk of developing cardiovascular disease, type-2 diabetes and high blood pressure.

Researchers from the University of Adelaide and the South Australian Health and Medical Research Institute (SAHMRI) focused particularly on concentrations of potentially harmful chemicals known as phthalates.

Phthalates are a group of hormone-disrupting chemicals widely used in common consumer products, such as food packaging and wrappings, toys, medications, and even medical devices.

» Phthalates are hormone-disrupting chemicals used widely in food packaging and in household and personal care products.

» While most research has focused on the risks of exposure in women and children, new Australian research shows that men’s health can be negatively impacted by long-term exposure.

» Men with the highest body burden of phthalates were at higher risk of developing cardiovascular disease, type-2 diabetes and high blood pressure, independent of any other causes of these conditions.

Writing in the international journal Environmental Research, they note that of the 1500 Australian men tested, phthalates were detected in urine samples of 99.6% of those aged 35 and over.

“We found that the prevalence of cardiovascular disease, type-2 diabetes and high blood pressure increased among those men with higher total phthalate levels,” says senior author Associate Professor Zumin Shi, from the University of Adelaide’s Adelaide Medical School and the Freemasons Foundation Centre for Men’s Health.

“While we still don’t understand the exact reasons why phthalates are independently linked to disease, we do know the chemicals impact on the human endocrine system, which controls hormone release that regulate the body’s growth, metabolism, and sexual development and function.”

In addition to chronic diseases, higher phthalate levels were associated with increased levels of a range of inflammatory biomarkers in the body. Chronic inflammation is linked to a wide range of degenerative human health disorders encompassing almost all present day diseases including autoimmune diseases, neurological disease, obesity, diabetes, atherosclerosis and even depression.

Age and western diets, according to the scientists, are directly associated with a higher body burden of phthalates. Previous studies have shown that men who ate less fresh fruit and vegetables and more processed and packaged foods, and drank carbonated soft drinks, have higher levels of phthalates in their urine.

“Importantly, while 82% of the men we tested were overweight or obese – conditions known to be associated with chronic diseases – when we adjusted for this in our study, the significant association between high levels of phthalates and disease was not substantially altered,” Associate Professor Shi says.

Likewise, when the team took into account socioeconomic and lifestyle factors such as smoking and alcohol, the association between high levels of phthalates and disease remained strong. In other words, independent of all other risk factors, phthalates can further raise the risk of disease.

A legacy of damage

It is likely that the men in this study were exposed to phthalates mainly through food packaging and, to a lesser extent than most women, possibly toiletries and household cleaners.

The damage that phthalates can cause is already well documented. They have been shown to reduce fertility in women, raise the risk of type-2 diabetes, and trigger weight gain. They may also be a risk for hormone dependent cancers in both men and women.

Because of their usefulness as a packaging materials industry is loath to give them up and so-called safe substitutes for commonly used phthalates – which are simply made from different types of phthalates – have been shown to raise the risk of high blood pressure and diabetes in children and adolescents.

It can be extremely difficult to avoid phthalates since they are in so many products. But you can limit your exposure by:

Wherever possible switch to organic (food, cosmetics etc) to further avoid being contaminated with industrial chemicals.

Men who eat more processed and packaged foods, and drink carbonated soft drinks, have higher levels of phthalates in their bodies. [Photo: Bigstock]