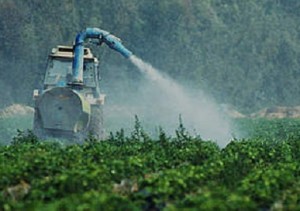 Natural Health News — Regardless of a person’s age, gender or body mass index, pesticides in food, air and water may be directly linked with the development of type 2 diabetes.

Persistent Organic Pollutants (POPs) like pesticides tend to concentrate in body fat, and they might be one of the reasons why obese people are more likely to develop diabetes, since the more fat the higher the POP concentrations in the body.

In a paper recently published in the journal Environmental Research, Spanish researchers analysed the concentrations of a specific group of POPs in the adipose tissue of 386 adults.

They found that people with higher concentrations of DDE – the main breakdown products or metabolite of the pesticide DDT– are four times more likely to develop type-2 diabetes than other people.

In addition, the risk of type-2 diabetes is also associated with exposure to β-HCH (beta-Hexachlorocyclohexane), which is present in the formula of the pesticide Lindano.

POPs are a group of chemicals with diverse characteristics which are present in pesticides, industrial waste and building materials. These compounds penetrate the body mainly through food, but also through air or the skin.

According to lead researcher professor Juan Pedro Arrebola, “the mechanism of action by which POPs increases the risk of diabetes is still unknown. However, some researchers have suggested that POPs might cause an immunological response when they penetrate estrogen receptors in tissues associated with the metabolism of sugars.”

The prevalence of diabetes in the world has significantly increased in the last decades. It is estimated that by 2030, 4.4% of the world population have this metabolic disorder.

This will have a severe impact on both the shape and the cost of public health programs. The factors causing such a big increase in the prevalence of diabetes are not still clearly understood though other studies have also implicated pesticide exposure in the development of the disease.

For instance it is known that people who work with pesticides are at an increased risk of diabetes.

In addition a 2011 study published in Diabetes Care – Finnish researchers analysed blood samples of 2,000 adults and found the highest exposure to the pesticide, oxychlordane, was associated with a two-times higher risk for type-2 diabetes.

Another good reason to switch to organic?