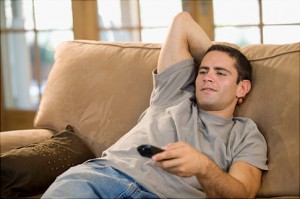 As TV time goes up, sperm count goes down

Natural Health News — OK fellas. Just in case you need another good reason to switch off the TV and get some exercise, here it is

According to the results of a recent study, men who watched TV for 20 or more hours a week had a significantly lower sperm concentration compared with men who did not watch TV.

Worse, say the scientists writing in the British Journal of Sports Medicine, the more time a man spent watching TV, the more the quality of his sperm declined.

The good news is that the opposite was also true.  The more physically active a man was, the more his sperm quality improved.

The findings come from a study involving 189 male college students ages 18 to 22. The young men reported their television viewing habits (TV, videos and/or DVDs) and the estimated number of hours and intensity of physical activity engaged in for the previous 3 months.

Participants could choose one of five categories of daily TV watching, ranging from none/almost none to more than 10 hours daily.

Overall those who watched TV for more than 20 hours a week had almost half the sperm count of men who watch very little TV, an alarming finding considering how young the men in the study were.

In contrast, those who logged 15 or more hours of moderate to vigorous exercise every week have sperm counts that are 73% higher than those who rarely exercised.

The researchers from the Harvard School of Public Health also noted that while sperm concentration and sperm count improved with physical exercise, sperm motility, sperm morphology, and sample volume were not affected.

In addition, unlike smoking or weight, the amount of TV viewing seemed to counteract the beneficial effects of exercise, although this may be a chance finding, say the authors.

Several studies have documented a decline in semen quality over the past several decades. Over the same time frame, physical activity has decreased and sedentary behaviour has increased, suggesting a possible link. In addition to sedentary lifestyles’ documented associations with obesity, diabetes and cardiovascular disease.

Sedentary behaviour — which usually involves sitting — also has been associated with increased scrotal temperature, which may adversely affect sperm quality, although the data are inconsistent, the authors noted. Moreover, watching TV, one of the most common sedentary activities, remains largely unexplored as a potential risk to sperm quality.

On the other hand, intense physical activity (primarily long-distance running and cycling) has been associated with reduced sperm quality. In contrast, the relationship between moderate physical activity and semen quality has remained unexplored.

The authors note that while a reduced sperm count doesn’t necessarily curb a man’s chances of being able to father a child, the findings do suggest that a more physically active lifestyle may improve semen quality.

The type of exercise might also be important, say the authors, who conclude: “Future studies should also evaluate the extent to which different exercise types affect semen quality as previous studies suggest that there might be opposing effects of different types of activity on semen characteristics.”