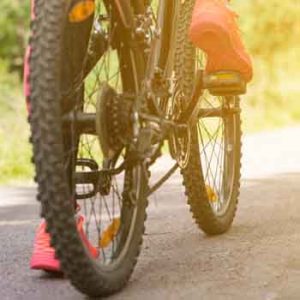 Finding ways to work brisk walking or cycling into your day could help you live longer. [Photo: Bigstock]

Time to get serious about exercise

The World Health Organization (WHO) guideline, adopted by many health authorities around the world, recommends 150 minutes of exercise a week. But for many people, especially office workers, this may not be enough.

The problem, according to a new study of over 1 million people, is not how active you are, but how many hours of uninterrupted inactivity you have each day.

Physical inactivity is linked to an increased risk of heart disease, diabetes and some cancers and is associated with more than 5 million deaths per year and,as a result is a major contributor to increased health care costs and lost productivity.

The findings come from a new four-paper series published in The Lancet and launched in London ahead of the Summer Olympic Games.

The authors of the series warn there has been too little progress in tackling the global pandemic of physical inactivity since the 2012 Olympics, with a quarter of adults worldwide still failing to meet current recommendations on physical activity.

The solution, they say isn’t as daunting as many of us fear; doing at least one hour of physical activity per day, such as brisk walking or cycling for pleasure, could eliminate the increased risk of death associated with sitting for 8h a day.

» A series of studies in the Lancet warn there has been too little progress in tackling the global pandemic of physical inactivity since the 2012 Olympics.

» Around a quarter of adults worldwide are still failing to meet current recommendations on physical activity and this is now a major contributor to rising healthcare costs.

» The authors highlight the proven links between inactivity, especially sitting all day without a break in offices, and diseases such as coronary heart disease, stroke, type-2 diabetes, breast cancer, and colon cancer.

» They suggest that an hour of physical activity per day is needed to off-set the effect of long hours of daily sitting. This is more than is currently recommended by expert bodies such as the WHO.

Researchers analysed data from over 1 million people from 16 studies. Their aim was to see how many hours of daily physical activity (such as brisk walking or cycling) would be required to eliminate the association between prolonged sitting time and increased risk of premature death.

In fact, the increased risk of death associated with sitting for 8 hours a day was eliminated for people who did a minimum of 1 hour physical activity per day. The greatest risk of death was for those who sat for long periods of time and were also physically inactive.

The recommended level of activity – 1 hour per day – is much lower than WHO guidelines which recommend that adults should do at least 150 mins of physical activity per week.

Says lead author Professor Ulf Ekelund, the Norwegian School of Sports Sciences, Norway and the University of Cambridge, UK, “Our message is a positive one: it is possible to reduce – or even eliminate – these risks if we are active enough, even without having to take up sports or go to the gym.”

He adds: “For many people who commute to work and have office-based jobs, there is no way to escape sitting for prolonged periods of time. For these people in particular, we cannot stress enough the importance of getting exercise, whether it’s getting out for a walk at lunchtime, going for a run in the morning or cycling to work. An hour of physical activity per day is the ideal, but if this is unmanageable, then at least doing some exercise each day can help reduce the risk.”

TV – a damaging form of inactivity

The research team also looked at time spent watching TV per day – a specific type of sedentary behaviour – in a subgroup of approximately half a million people. They found similar results: sitting watching TV for over 3 hours per day was associated with an increased risk of death in all activity groups, except the most active.

The authors say that this could be due to a number of factors – for instance, long hours watching TV may be a marker of a more unhealthy lifestyle in general including being less likely to take exercise. Also, because people usually watch TV in the evenings after dinner which might affect their metabolism, or because people may be more likely to snack while watching TV.

The authors warn that the study mainly included data from people aged over 45 years old from the USA, Western Europe and Australia, so may not necessarily apply to other populations.

“Our study makes the economic case for a global response to promote physical activity to tackle diseases such as diabetes, heart disease and some cancers, with the aim of reducing health inequalities.”

The authors note that the study only included costs for the five major diseases associated with physical inactivity (coronary heart disease, stroke, type-2 diabetes, breast cancer, and colon cancer), therefore the cost calculations are based on conservative estimates, and the true cost may be even higher.

Although there has been progress in developing national policies, the authors found these were too often not being put into practice.

In 2010, 75% of countries reported having a physical activity policy but only 44% reported it being operational. In 2015, over 90% had a policy and 71% reported it being operational. But there has been little progress in increasing levels of physical activity with 23% of the global adult population and 80% of school-going adolescents failing to meet the WHO recommendation of 150 minutes of moderate-intensity exercise per week in 2015.

“In the past four years, more countries have been monitoring progress in physical activity, but evidence of any improvements is scarce. We know that physical inactivity is linked to diseases including heart disease, diabetes and some cancers, and new evidence also shows that 300,000 cases of dementia could be avoided annually if all people were physically active. The global pandemic of physical inactivity remains, and the global response has been far too slow” says lead author Professor Jim Sallis, University of California San Diego, San Diego, CA, USA.

Increasing levels of physical activity will require collaboration between schools, urban planning, transport, sports and recreation and the environmental sectors, and greater efforts should be made to actively monitor physical activity as a risk factor in clinical practice.

The authors point to several successful examples such as the Bus Rapid Transit (BRT) System introduced in Curitiba (Brazil), Bogota (Colombia) and Cambridge (UK) which puts stops further apart than traditional bus stops to encourage walking; or the Coordinated Approach to Child Health (CATCH) in the USA which promotes a healthy school environment including physical activity, food, nutrition and sun protection.

Commenting on the series of studies, Dr Pam Das, Senior Executive Editor and Dr Richard Horton, Editor-in-chief of The Lancet say: “The world needs to get serious about physical activity…There is extensive evidence about the need for action to improve physical activity, what actions are most promising, and who needs to be involved. But capacity and funding remains insufficient because physical activity is not taken seriously enough to rise to the top of the funding priorities.”

Finding ways to work brisk walking or cycling into your day could help you live longer. [Photo: Bigstock]