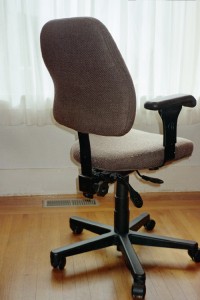 Sitting for long periods every day can have a devastating effect on health [Image: Emiellaiendiay - Wikimedia Commons]

Chances are you are sitting down while you read this. If so it’s time to get up because not only can sitting for long periods of time cause postural problems, and backache, it can actually shorten your lifespan.

Many of us have sedentary jobs and engage in sedentary activities after work, like watching television or sitting around a dinner table talking. When you add it all up that’s a lot of inactivity.

Our bodies, of course, are designed for movement. A healthy metabolism depends on a healthy amount of activity. When we sit for long periods of time the large muscles in our legs and back aren’t working. When these muscles aren’t working the metabolism slows down and this in turn impacts on health in multiple ways.

The rate at which a sitter burns calories, for instance plummets to about one per minute, a third of what it would be if you were walking around. Insulin effectiveness quickly drops and the risk of developing type-2 diabetes rises. Levels of the enzymes responsible for removing fat from the bloodstream  plunge, and this in turn causes levels of HDL (‘good’) cholesterol to fall too.

It’s not a pretty picture and a raft of recent studies have shown that even amongst those who break out of the sitting routine for short bursts of exercise during the week, it may not be enough to counteract the effects of too much sitting during the rest of the day.

For instance, if you do 30 minutes of walking five days a week (as recommended by federal health officials), maybe you you sleep for eight hours, that still leaves 15.5 hours in the day when you are probably just sitting. The effect on health is staggering.

A study in the journal Medicine & Science in Sports & Exercise, the official journal of the American College of Sports Medicine    examined the lifestyles of more than 17,000 men and women over 13 years and found those who sit for most of the day were 54% more likely to die of heart attacks during that time. That scary statistic held true even if the people in the study were nonsmokers and regular exercisers.

Another study by the American Cancer Society tracked 123,000 people in the US between 1992 and 2006 and found the death rate for those who spent six or more hours a day sitting was 20% higher than for men who sat for three hours or less. For women, the difference was 40%.

When scientists at the University of South Carolina recently looked at adult men and their risk of dying from heart disease they began by calculated how much time the men spent sitting — in their cars, at their desks, in front of the TV. In another study also published in Medicine & Science in Sports & Exercise,  they revealed that those who were sitting more were substantially more at risk of early death.

People who sit for long periods of time, they concluded have higher levels of cholesterol, blood sugar, and are at increased risk of diabetes, heart disease and a number of health problems. The risks are so great that recently the American Journal of Preventative Medicine ran a themed issue devoted to the health problems associated with prolonged sitting.

So what’s the alternative? It’s simple:  get up and move. Make sure you have frequent small breaks during the day when you are not sitting. Don’t eat at your desk but instead make a point of going out. And when you are moving make those moments count. For instance instead of just walking the kettle to make another cup of coffee consider doing something more positive such as a bit of office yoga.

Sitting for long periods every day can have a devastating effect on health [Image: Emiellaiendiay - Wikimedia Commons]