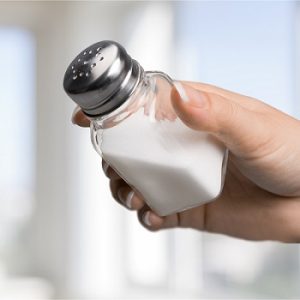 Is salt really the villain of the piece when it comes to health? New evidence suggests it's not. [Photo: Bigstock]

Could low salt diets create more problems than they solve?

Natural Health News — ‘Eat less salt’ has become a mantra of health-consciousness and is seen as an important step in reducing heart disease and hypertension.

Too much salt in the diet – or more specifically specifically sodium – has for years been blamed as a risk factor for high blood pressure. However, scientists have found that salt’s other oft-overlooked constituent, chloride, also has a role in ‘physiology of the body’.

Chloride is an electrolyte that works with potassium, sodium and carbon dioxide in order to maintain the correct balance of body fluids, as well as maintaining the body’s acid-based balance.

Low chloride is a risk factor

A study by researchers at the University of Glasgow have analysed data of almost 13,000 patients with high blood pressure over a 35-year follow-up period, from the early 1970s until 2011.

Its results revealed that low chloride levels in the blood is an independent indicator of mortality risk in people with hypertension. The role of chloride in hypertension has received little attention from scientists hitherto.

The group with the lowest level of chloride in their blood had a 20% higher mortality rate compared to the other subjects. The results are published in the journal Hypertension.

Lead researcher Dr Sandosh Padmanabhan of the Institute of Cardiovascular and Medical Sciences, said: “Sodium is cast as the villain for the central role it plays in increasing the risk of high blood pressure, with chloride little more than a silent extra in the background.

“However, our study has put the spotlight on this under-studied chemical to reveal an association between low levels of chloride serum in the blood and a higher mortality rate, and surprisingly this is in the opposite direction to the risks associated with high sodium.

“It is likely that chloride plays an important part in the physiology of the body and we need to investigate this further.”

Chloride is already measured as part of routine clinical screening and so monitoring of chloride levels could easily be incorporated into clinical practice to identify individuals at high risk.

Says Dr Padmanabhan: “The results we see from this study are confounding against the knowledge that excess salt is a bad thing, yet higher levels of chloride in the blood seems to be an independent factor that is associated with lower mortality and cardiovascular risk.”

He added: “We seem to have entered a grey area here that requires further investigation.”

Is salt really the villain of the piece when it comes to health? New evidence suggests it's not. [Photo: Bigstock]