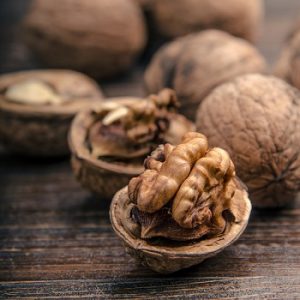 Walnuts are rich in the amino acids arginine and lysine which trigger cells in the brain to tell you when you are full. [Photo: Bigstock]

Natural Health News — If snacking is your downfall in the struggle against weight gain, new research from the UK could be good news.

University of Warwick scientists have identified key brain cells which control our appetite – and the foods that help them do their job.

According to lead researcher Professor Nicholas Dale, tanycytes – cells found in part of the brain that controls energy levels – detect nutrients in food and tell the brain directly about the food we have eaten.

According to the new data, tanycytes in the brain respond to amino acids found in foods, via the same receptors that sense the flavour of amino acids (commonly known as “umami” taste), which are found in the taste buds of the tongue.

Two amino acids that react most with tanycytes – and therefore are likely to make you feel fuller – are arginine and lysine.

» A new laboratory study has identified key cells in the brain responsible for controlling appetite.

» Understanding how this relationship works, say the scientist could help us design more effective dietary regimens.

These amino acids are found in high concentration in protein-rich animal products, fruits, vegetables, grains, nuts and seeds, such as:

Other foods may feel just as filling when you eat them, but the key brain cells won’t be stimulated in the same way.

In contract eating these foods, according to the study published in the journal Molecular Metabolism, will activate the tanycytes and make you feel fuller and more satisfied, more quickly. This is because protein is digested more slowly and does not cause the rise in blood sugar which makes us crave more food soon after finishing a meal.

But even is these amino acids bypass the digestive system they still work their magic on the brain.

In the current study scientists found that brain cells reacted to the amino acids from these foods within 30 seconds, sending chemical signals which would travel to the part of the brain controlling appetite and body weight.

Dale, who is a Ted Pridgeon Professor of Neuroscience at the University of Warwick, comments:

“Amino acid levels in blood and brain following a meal are a very important signal that imparts the sensation of feeling full. Finding that tanycytes, located at the centre of the brain region that controls body weight, directly sense amino acids has very significant implications for coming up with new ways to help people to control their body weight within healthy bounds.”

Excess weight elevates the risk of premature death and a range of illnesses, such as cancer, diabetes, cardiovascular disease and stroke, which greatly reduce quality of life.

The findings which suggest the natural effect of amino acids in the foods we already eat, raise the possibility of future diet plans which could suppress the appetite and help people lose weight.

Walnuts are rich in the amino acids arginine and lysine which trigger cells in the brain to tell you when you are full. [Photo: Bigstock]