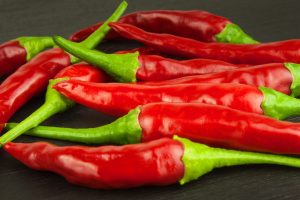 Natural Health News — Resisting food cravings for salty snacks can be hard. But new research on how the brain works may have hit upon a healthy suggestion.

Chinese scientists have been studying how the brain reacts to salty and spicy tastes.

Their earlier work showed that those who enjoyed spicy foods appeared to eat less salt and have lower blood pressure, potentially reducing their risk of heart attack and stroke.

Writing in the journal Hypertension they note that: “Previously, a pilot study found that trace amounts of capsaicin, the chemical that gives chili peppers their pungent smell, enhanced the perception of food being salty. We wanted to test whether this effect would also reduce salt consumption.”

» The researchers suggest that increasing the amount of spicy food in the diet can help to reduce salt intake and thus the risk of heart disease.

The study enrolled 606 Chinese adults and determined their preferences for salty and spicy flavours. Researchers then compared those preferences to participants’ blood pressure.

They found that, compared to those who least enjoyed spicy foods, participants with a high spicy preference:

The scientists also used high tech imaging to look at two regions of the participants’ brains — the insula and orbitofrontal cortex — known to be involved in salty taste.

They found that the areas stimulated by salt and spice overlapped, and that spice further increased brain activity in areas activated by salt. This increased activity likely makes people more sensitive to salt so that they can enjoy food with less of it, they said.

“If you add some spices to your cooking, you can cook food that tastes good without using as much salt,” said senior study author Zhiming Zhu, M.D., professor and director of the Department of Hypertension and Endocrinology at the Third Military Medical University in Chongqing, China. ”

“Yes, habit and preference matter when it comes to spicy food,” he added, “but even a small, gradual increase in spices in your food may have a health benefit.”

The team says they would now like to test their findings in other countries to see if people there experience the same benefits from spicy foods.