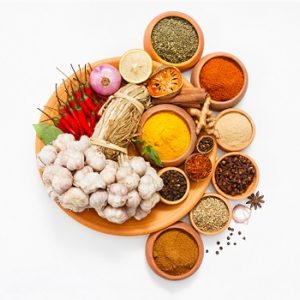 Using herbs and spices helps to cut back on salt

Natural Health News — Teaching people how to flavour food with spices and herbs is considerably more effective at lowering salt intake than having them do it on their own, according to research

University of San Diego researchers in the US presented the  findings of their small study, at the American Heart Association’s Epidemiology & Prevention/Nutrition, Physical Activity & Metabolism Scientific Sessions 2014.

In the first phase of the study, which was supported by the McCormick Science Institute (funded by McCormick & Company, the spice company) 55 volunteers ate a low-sodium diet for four weeks. Researchers provided all foods and calorie-containing drinks. Salt was the main source of sodium in food.

In the second phase, half of the study volunteers participated in a 20-week behavioural intervention aimed at reducing their sodium intake to 1,500 mg/day by using spices and herbs. The other half were told to reduced sodium on their own.

Those assigned to the behavioural intervention group had cooking demonstrations and had a chance to share how they were changing traditional recipes to remove salt and include spices. The researchers didn’t emphasize specific spices, and encouraged participants to try different things to find out what they liked most.

Learning not to use salt

“People in the intervention group learned problem-solving strategies, use of herbs and spices in recipes, how culture influences spice choices, how to monitor diet, overcoming the barriers to making dietary changes, how to choose and order foods when eating out and how to make low-sodium intake permanent,” said Cheryl A M Anderson, PhD, MPH, lead author of the study and associate professor in the Department of Family and Preventive Medicine.

Noting that more than 60% of the participants in the study had high blood pressure, 18% had diabetes and they were overweight, she added: “Salt is abundant in the food supply and the average sodium level for Americans is very high – much higher than what is recommended for healthy living.”

Healthy eating guidelines suggest an upper limit of 2.3g of sodium per day (equivalent to 6 grams of salt, which is a compound containing of sodium and chloride). The average American’s consumption of sodium is 3.4g per day. In the UK the figure is 3.2g. These figures are in line with intake elsewhere in the developed world.

Salt, of course, is a necessary element of our diets, but added salt (like added sugar), particularly in pre-prepared foods, has pushed our salt/sodium levels higher than is healthy. Thus any reduction for instance from preparing fresh foods and flavouring them with herbs and spices is likely to have a positive impact.