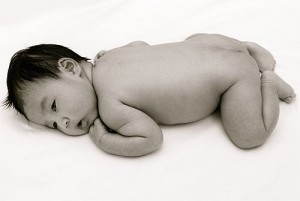 Natural Health News — Healthy newborn babies are less likely to develop an iron deficiency if the umbilical cord is kept in place for three minutes at birth, according to a new study published in the British Medical Journal.

Studies in Africa and South America, where iron deficiency is most common, have shown that delaying umbilical cord clamping improves irons status in infants, but it was unclear whether it is also beneficial countries where malnutrition is less common. Because of this, hospitals have different guidelines and best practices regarding clamping.

In the latest study Swedish researchers tested 400 babies – some who had their umbilical cords clamped after at least three minutes and others who had them clamped immediately,  less than 10 seconds after delivery.

The babies whose umbilical clamping was delayed benefited from higher iron levels at four months.

According to the researchers, for every 20 babies whose cords are clamped three minutes or more after birth, one case of iron deficiency would be prevented. There were also fewer cases of neonatal anaemia in those with delayed clamping.

There were no adverse health effects from delayed clamping and the researchers concluded that delayed cord clamping should be considered as standard care for full-term deliveries after uncomplicated pregnancies, even in developed countries.

Early cord clamping has become controversial in the last decade or so because some hospitals ‘harvest’ umbilical cord blood for stem cell research. Women are often approached antenatally and asked if they would like to donate their cord blood and told there is no risk to the baby.

The amount of blood taken varies but is usually around 150-20oml – out of the potential 600mls in the baby’s body.

There is conflicting data on whether depriving the baby of cord blood also deprives babies the baby of essential stem cells. In addition to possible iron deficiency found in this study, parents should consider all the facts and potential risks, before agreeing to donate cord blood.

A selection of publications can be found here.