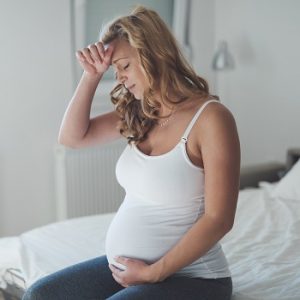 Pregnant women who are iron deficient may be more likely to have higher levels of depression. [Photo: Bigstock]

Maternal depression during pregnancy can affect both the mother and her family. Although research has suggested that iron deficiency is associated with depression in the general population, this link has not been studied during the antenatal period.

To find out more Canadian researchers looked back at the records of women between the ages of 18 and 25 who were in middle to late pregnancy and who visited the Women’s Health Concerns Clinic in Hamilton, Ontario, in the period between 2009 and 2016. This particular hospital specialised in treating mood and anxiety disorders during the perinatal period, ​the researchers wrote in their report​​, which was published this month in the Journal of Obstetrics and Gynaecology Canada.

This data showed that 31% of women were iron deficient. On average, those women who were iron deficient also scored higher on questionnaire, used to determine the presence of depression, than pregnant women with normal iron levels.

» A small study by Canadian researchers has shown that women in mid to late pregnancy who are iron deficient , may be at higher risk of depression.

» The researchers suggest that clinicians and mothers may benefit from a greater awareness of the possible role of iron deficiency in the development and risk of maternal depression during pregnancy.

“The study of women in the second or third trimester of pregnancy suggests that a link exists between iron deficiency and antenatal depression”, ​the researchers wrote.

Even after adjusting for confounding variables, the findings persisted, the researchers argued, suggesting that “iron deficiency could be an important risk factor for the development of depression during pregnancy.”​

This was a small study and the researchers say that because the women studied were already at rick of mood disorders, the results may not be true for all pregnant women. They also added that the study design didn’t account for nutritional status of patients during pregnancy, and the iron deficiency may be a marker of poor nutrition in general.

Nevertheless they suggest that, but added that in spite of this “clinicians providing antenatal care may benefit from an awareness of the possible role of iron deficiency in the development and risk of maternal depression during pregnancy.” ​

Pregnant women who are iron deficient may be more likely to have higher levels of depression. [Photo: Bigstock]