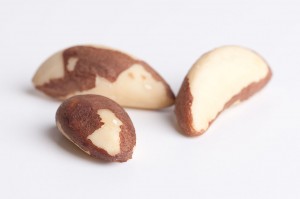 Ensuring you get enough selenium during pregnancy - either from food or supplements - could help prevent post-natal depression [Image: רנדום - Wikimedia Commons]

Reliable data suggests multiple benefits to the baby, including a lower risk of certain congenital defects and some types of childhood cancers. Supplementing also ensures that the mother’s physiological needs are met during a physically demanding time of life.

Less well understood is the impact that supplements might have on the mother’s mental status in particular her risk of developing depression in the post-natal period.

In a recent study Canadian researchers 475 women during pregnancy and the post-natal period and monitored their moods via a standardised questionnaire designed to assess their risk of post-natal depression.

Almost all of the women (99%) took some type of micronutrient supplement during the prenatal period.

What they found was that amongst women with a higher overall nutrient intake from supplements, the risk of depression was lower.

Specifically, the study published in BMC Pregnancy and Childbirth found that higher average intakes of omega-3 and especially selenium appeared to be the most protective.

A mood booster whether you are pregnant or not

Other studies have reached similar conclusions regarding selenium. In 2011 a study of Iranian women also found a link between selenium and the risk of post-natal depression.

And it’s not just pregnant women that can benefit. In 2012 an Australian study found that low intake of selenium (less than 8.9 mcg per day) in non-pregnant adult women was associated with almost a three-fold increase in the likelihood of major depressive disorder.

Selenium is an antioxidant and it also helps to regulate thyroid function and the healthy function of the immune system Exactly how reduces the risk for depression is not well understood.

The recommended daily intake of selenium for adult women is 55 mcg. For pregnant women it’s 60 mcg and for breastfeeding women it’s 70 mcg.

It’s always best to try nad get as much as you can from your diet. However the selenium content of any food is dependant on the health, and therefore the selenium content, of the soil it is grown in. While clinical deficiency is very rare many of us do not get enough. In addition not all pre-natal vitamin supplements contain selenium, so it’s worth checking the label.

In general the most selenium-rich foods are:

It should also be noted that post-natal depression is a complex disorder and usually has more than one cause including ongoing life stress, traumatic birth experience, lack of support from family, friends and healthcare workers. These also need to be addressed to help lower the risk of post-natal depression. Ensuring a good diet and adequate nutrition, however, is also an important way to help women feel stronger and better able to cope.

Ensuring you get enough selenium during pregnancy - either from food or supplements - could help prevent post-natal depression [Image: רנדום - Wikimedia Commons]