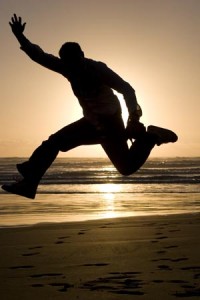 Exercising in the fresh air is always good, but being near the ocean is particularly beneficial [Image: Peter Lowden - Morguefile]

Natural Health News — Exercise in the open air is good for you, but if you want to reap the full benefits you should head for the coast or the countryside rather than an urban park.

That is the conclusion of research by a team of British researchers who studied data from 2750 people in England drawn from a two-year study of people’s engagement with the natural environment. The study was conducted on behalf of Natural England – the group that advises the UK government on matters related to the environment.

They looked at people who had visited urban parks, the countryside and the coast. What they found was that all outdoor locations were associated with positive feelings (enjoyment, calmness, refreshment), but that visits to the coast were most beneficial and visits to urban parks least beneficial.

A favourite for all ages

This remained true even when the researchers took account of factors like people’s age, how far they had travelled, the presence of others and the activity they undertook.

For instance, amongst the six different age groups examined the seaside was always identified as being a more positive experience than other inland parks or country walks.

A preference for the seaside was found both in the general population and among walkers. People travelling on their own were particularly likely to get more enjoyment from a coastal setting.

It wasn’t clear why being beside the seaside should be more rejuvenating but the researchers suggest that sensory pleasure, for instance the sight of the light reflecting on the water, or the sounds of the sea, plays a part. Happy childhood memories of seaside holidays, or deeply ingrained cultural expectations the benefits of sea air of may also be influential.

Dr Mathew White from the European Centre for Environment and Human Health (ECEHH), who presented the findings of the study to the recent British Psychological Society Annual Conference in London, suggests that in humans it could simply reflect an “innate preference” for the sights and sounds of water.

He adds: “There is a lot of work on the beneficial effects of visiting natural environments, but our findings suggest it is time to move beyond a simple urban versus rural debate and start looking at the effect that different natural environments have on people’s health and well-being.”

NYR Natural News readers will already know we are big fans of outdoor exercise because of its multiple benefits on mind, body and soul. To read more on this topic see Dr Mark Atkinson’s excellent article here.

Exercising in the fresh air is always good, but being near the ocean is particularly beneficial [Image: Peter Lowden - Morguefile]