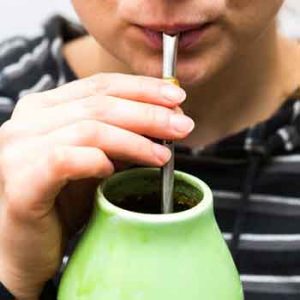 Natural Health News — If you are into strength training this may be helpful news.

A new study has found that maté tea significantly improves the rate of strength recovery after ‘eccentric exercise’ by nearly 9% for up to 24 hours afterwards.

» Strength training using eccentric exercise – the controlled lowering of heavy weights – can damage muscles and requires support for recovery in between training sessions.

» Antioxidant supplements are one strategy for muscle repair. But a new small study has shown that maté tea may also be helpful in the 24 hours after training.

» Athletes who regularly had a small amount of maté tea (200ml three times daily) had higher antioxidant levels in their blood and recovered their muscle strength more quickly than those who just drank water.

It forcibly lengthens the muscle and long repetitious sessions can result in muscle damage and an immediate decline in muscle strength. Recovery of muscle function can take several days depending on the extent of damage.

The problem, say scientists from Federal University of Santa Catarina in Brazil, is that the inflammatory and oxidative stress processes triggered as the body tries to repair itself could paradoxically, contribute to additional damage and delayed recovery of muscle strength.

Dietary strategies using supplemental antioxidants are one way to mitigate the damage. Another, according to a small study published in the British Journal of Nutrition, is a tea made from phenolic rich yerba maté (Ilex paraguariensis).

Yerba maté originates from South America and is a good source of antioxidant and anti-inflammatory phytochemicals such as phenolic compounds and saponins.

In a small randomised cross-over trial, 12 healthy men drank either 200 ml of maté tea or water three times a day for an 11-day treatment period. All the men maintained their usual diets throughout the study, but were told not to consume additional antioxidant rich beverages such as tea and wine more than three times a week.

On the eighth day the men performed a damaging eccentric exercise with one arm. Muscle strength was measured at zero, 24, 48 and 72 hours after exercise. Blood samples were also taken at these points to measure antioxidants and oxidative stress.

A second treatment period was carried out testing the other arm after a 17-day period without tea.

Regardless of treatment, muscle strength was reduced after eccentric exercise, but maté tea improved the rate of strength recovery by 8.6% on the first day after exercise.

Phenolic compounds in blood were higher in the maté tea drinkers at all time points, but decreased from 48-72 hours after exercise.

Apart from being rich in antioxidants, yerba maté also contains caffeine so it can give a temporary ‘energy’ boost. It also contains L-theanine an amino acid that aids focus and attention.

Previous research has suggested beneficial effects of maté tea for disorders such as diabetes and obesity.

Some studies have connected yerba maté use to cancers of the mouth, oesophagus, prostate, bladder and lungs among those who drink it in large quantities. A closer look reveals, however, that the risk is greatest among users who also smoke and are heavy drinkers of alcohol. This finding is consistent with trials in antioxidants. There is no research suggesting that drinking maté tea occasionally is dangerous.