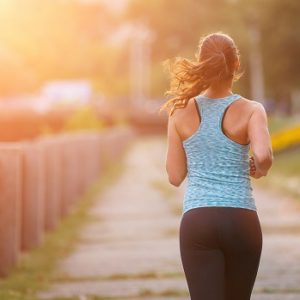 Raising your level of physical activity can help ward off depression. [Photo: Bigstock]

Exercise – what the doctor should order to prevent depression

Natural Health News — Exercising for just 20 minutes a day could cut the risk of developing depression by one third, according to a new analysis.

The international team of researchers from Brazil, Belgium, Australia, USA, UK and Sweden say their report is the first global meta-analysis to demonstrate that physical activity helps protect against depression.

The researchers began their study by collecting any past studies which looked at physical activity and depression. This yielded more than 13,000 papers from which they took the best 49, which involved 266,939 people from across Asia, Europe, North America, and Oceania. The average follow up time across these studies was 7.4 years.

“The evidence is clear that people that are more active have a lesser risk of developing depression,” said lead author Felipe Barreto Schuch, an exercise scientist at Universidade La Salle in Brazil. “We have looked at whether these effects happen at different age groups and across different continents and the results are clear. Regardless your age or where you live, physical activity can reduce the risk of having depression later in life.”

» A large international meta-analysis has found that regular exercise can significantly prevent the development of depression.

» The benefits were seen across all age groups and across all continents and the authors say it makes a strong case for engaging all people in regular physical activity; through schools, workplaces, leisure programs and elsewhere.

» The benefits of exercise in depression may be down to the way it supports and strengthens a healthy nervous system.

The findings, which were published in the  American Journal of Psychiatry, did not look at specific types of activity, but did take into account important factors like physical health conditions, smoking and body mass index. Even so they showed the value of engaging people in physical activity in a variety of settings, according to co-author Joseph Firth.

“The compelling evidence presented here provides an even stronger case for engaging all people in regular physical activity; through schools, workplaces, leisure programs and elsewhere, in order to reduce the risk of depression across the lifespan,” said Firth, a research fellow at the National Institute of Complementary Medicine at Australia’s Western Sydney University.

They hypothesize that improving levels of physical activity reduces inflammation, increases neurogenesis, the process by which nervous system cells, known as neurons, are produced. This is important because increasingly research is suggesting that nerve cell connections, nerve cell growth, and the healthy functioning of nerve circuits have a major impact on depression. Exercise may also activate the endocannabinoid system, which has in the past been linked to exercise-induced euphoria, sometimes called ‘runner’s high’.

The study further suggests that physical activity may directly increase psychological factors such as self-esteem or perceptions of physical competence.

“Given the multitude of other health benefits of physical activity, our data add to the pressing calls to prioritize physical activity across the lifespan,” said co-author Brendon Stubbs, a postdoctoral research physiotherapist at King’s College London.

But you’ve got to commit

The findings come not long after another study from the University of Adelaide, published in the Journal of Affective Disorders, found that stopping exercise can result in increased depressive symptoms. The authors acknowledge that starting and maintaining exercise can have benefits on mental health – what they wanted to know was what happened if a person suddenly dropped their exercise regimen.

It’s not a questions that has had much focus but the research team found and reviewed studies that investigated the cessation of exercise in 152 adults. They had each undertaken at least 30 minutes of exercise, three times a week, for a minimum of three months.

“In some cases, ceasing this amount of exercise induced significant increases in depressive symptoms after just three days,” says Professor Bernhard Baune, Head of Psychiatry at the University of Adelaide and senior author on the paper.

Taken together these studies show the importance of not just starting but maintaining regular programme of physical activity in order to support good mental health.

Raising your level of physical activity can help ward off depression. [Photo: Bigstock]