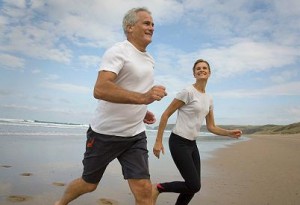 Spotlight on the antidepressant effects of exercise

Natural Health News — Regular exercise may help ease symptoms of depression, according to a new report.

Researchers from the University of Edinburgh, who have analysed data from previous studies, found people who exercised experienced a ‘moderate’ reduction in their depressive symptoms compared with those who did other activities, such as using relaxation techniques, or received no treatment.

The review was published recently in the Cochrane Database of Systematic Reviews.

“This review provides some additional evidence that there may be some benefit [to exercise],” says lead author Dr Gillian Mead, of the Centre for Clinical Brain Sciences at the University of Edinburgh.

The most popular treatments for depression include antidepressant medications and psychotherapy. But a 2009 review from the Cochrane Collaboration, an international organisation that evaluates medical research, found similar results, but more studies looking at the link between exercise and depression have since been published.

As many as 1 in 10 adults reports suffering from some form of depression and, as Dr Mead and her fellow researchers acknowledge, many people prefer alternative treatments, and some doctors recommend exercise as a potential option.

For the new review, they searched databases for all medical trials conducted through March 2013 that compared exercise among adults with depression to other activities or no treatment.

Some of these trials showed very encouraging results.

In one of the included trials from 2007, for instance, researchers found 45% of people who took part in supervised exercise no longer met the criteria for depression after four months, compared with 31% taking a placebo pill.

In another trial from 2002, 55% of older people experienced a significant decline in depression symptoms after 10 weeks of exercise, compared with 33% who attended informational talks during that time.

Benefits from a long term commitment to exercise

As is always the case with meta-analyses of this type, the studies were of variable quality and results.

But based on data from a relatively small number of trials, the overall effect of exercise was to help reduce depressive symptoms as much as psychotherapy or antidepressant medications.

The beneficial effect appeared to be most powerful when exercise was incorporated into a person’s lifestyle over the longer term.

Frustratingly the researchers were also unable to say which type of exercise is best, but Dr Mead says previous reviews have recommended people choose an activity that they will stick with over the long run. This is especially important since the emotional and psychological benefits of exercise tend to drop off when a person stops exercising.