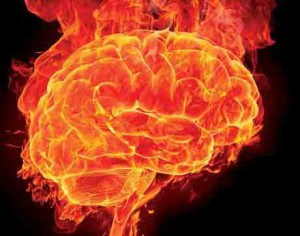 Could treating inflammation in the brain help treat the symtoms of depression?

Natural Health News — People who suffer from severe clinical depression could be suffering from inflammation of the brain, according to a new study.

The finding that depressed individuals tend to have brains that are 30% more inflamed than healthy brains, may lead to new depression treatments that target inflammation, say Canadian researchers at the Centre for Addiction and Mental Health (CAMH).

Inflammation is the immune system’s natural response to infection or disease. The body often uses inflammation to protect itself, such as when an ankle is sprained and becomes inflamed, and the same principle also applies to the brain. However, too much inflammation is unhelpful and can be damaging.

Chronic inflammation is essentially an overzealous immune reaction and has been shown to be a contributor to a wide range of conditions, including heart disease, asthma, and joint pain. Now, say the scientists, the evidence is mounting that inflammation may drive some depressive symptoms, such as low mood, loss of appetite and reduced ability to sleep as well.

“This finding provides the most compelling evidence to date of brain inflammation during a major depressive episode,” said senior author Dr. Jeffrey Meyer of CAMH’s Campbell Family Mental Health Research Institute. “Previous studies have looked at markers of inflammation in blood, but this is the first definitive evidence found in the brain.”

Specifically, the researchers were able to measure the activation of immune cells, known as microglia, that play a key role in the brain’s inflammatory response. They used a brain imaging technique called positron emission tomography (PET) to conduct brain scans on 20 patients with depression (but otherwise healthy) as well as 20 healthy control participants.

Results, published in the journal JAMA Psychiatry, showed a significant elevation of brain inflammation in participants with depression; levels of inflammation were highest among those with the most severe depression.

Although the process of inflammation is one way in which the brain protects itself (similar to the inflammation of a sprained ankle), too much inflammation can be damaging. A mounting body of evidence suggests that brain inflammation may generate the symptoms of depression, such as low mood, loss of appetite, and inability to sleep.

But what was previously unclear was whether inflammation played a role in clinical depression independent of any other physical illness.

Pointing the way towards new treatments

More than half of people with severe depression do not respond to antidepressant treatments and four percent of the general population is in the midst of a clinical episode. Current treatments do not target inflammation, and treating depression with anti-inflammatories is one avenue for future research

“This discovery has important implications for developing new treatments for a significant group of people who suffer from depression,” says Meyer.  “It provides a potential new target to either reverse the brain inflammation or shift to a more positive repair role, with the idea that it would alleviate symptoms.”

“Depression is a complex illness and we know that it takes more than one biological change to tip someone into an episode,” said Meyer. “But we now believe that inflammation in the brain is one of these changes and that’s an important step forward.”

The new evidence suggests that, in addition to anti-inflammatories, treatments like acupuncture, diet changes, mind-body therapies, supplements and the sparing use of drugs which are often used to reduce chronic inflammation in the body and may also have value in the treatment of depression and its symptoms.

Could treating inflammation in the brain help treat the symtoms of depression?