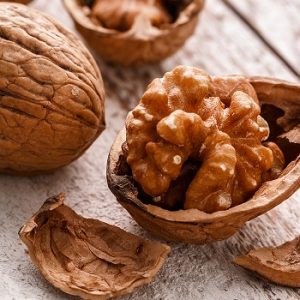 Natural Health News — Diets rich in nuts, such as walnuts, have been shown to play a role in heart health and in reducing colorectal cancer.

It’s long been assumed that their benefits stem from the healthy oils found in nuts. But according to a new study from the University of Illinois, the way walnuts impact the gut microbiome – the trillions of bacteria in the gastrointestinal tract – may be behind some of those health benefits.

Walnuts are just one of a number of foods that contain dietary fibre and have interested scientists for their impact on the microbiome and health. Dietary fibre acts as a food source for gut microbiota, helping the bacteria to do their jobs – breaking down complex foods, providing us nutrients, or helping us feel full, for example.

Fruits, vegetables, whole grains, nuts, and legumes are important plant sources of dietary fibre. Eating a variety of these foods helps promote a diverse gut microbiota, which in turn helps to support health.

Findings from the study, published in The Journal of Nutrition, show that consuming walnuts not only impacted the gut microbiota and microbial derived secondary bile acids, but also reduced LDL-cholesterol levels in the adults participating in the study; good news for cardio, metabolic, and gastrointestinal health.

» Diets rich in nuts, such as walnuts, have been shown to play a role in heart health and in reducing colorectal cancer.

» A new study shows that the healthy fibre in walnuts feeds beneficial bacteria in the gut that reduce inflammation and improve insulin sensitivity and may help protect against colorectal cancer.

» Benefits were seen with just 42g – about a third cup or a palm-full – of walnuts daily.

“We found that when you consume walnuts it increases microbes that produce butyrate, a beneficial metabolite for colonic health. So the interaction of walnuts with the microbiome is helping to produce some of those health effects,” says Hannah Holscher, assistant professor of food science and human nutrition at University of Illinois, and lead author of the study. “It is about getting to the ‘black box’ that is all the microbes in our GI tract to see how they are interfacing with the food we eat and having downstream health effects.

“Some of those health effects are hypothesized to be related to the metabolites bacteria produce,” she adds.

For the controlled-feeding study, 18 healthy male and female adults consumed diets that either included no walnuts or 42 grams – about a third cup or a palm-full – of walnuts for two, three-week periods. Faecal and blood samples were collected at the beginning and end of each period to assess secondary outcomes of the study, including effects of walnut consumption on faecal microbiota and bile acids and metabolic markers of health.

“The microbes that increased in relative abundance in this walnut study are from one of the Clostridium clusters of microbes, and there’s increased interest in those because they have the ability to make butyrate,” Holscher says. “Unfortunately in this study we didn’t measure butyrate, so we can’t say that just because these microbes increased that butyrate did increase. We still need to answer that question.

Previous research that prompted this microbial research showed that the amount of energy (calories) derived from walnuts after we eat them is less than previously thought.

“When you do calculations to determine how much energy we predicted we would get from eating walnuts, it didn’t line up with the energy that was absorbed,” Holscher says. “You’re really only absorbing around 80% of the energy from walnuts that labels say. That means that the microbes get access to that extra 20% of calories and the fats and fibre left in them, and so what happens then? Does it produce a positive health outcome, or a negative health outcome? Our study provides initial findings that suggest that the interactions of microbes with the undigested walnut components are producing positive outcomes.” Holscher says.