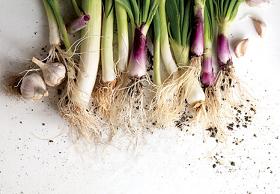 Garlic, onions and leeks, all members of the allium family, are good sources of gut-friendly fermentable fibre

Natural Health News — The Western diet probably has more to do with the asthma epidemic than has been assumed so far, according to new research.

Swiss scientists have recently found that developing asthma is linked  the health of the gut and this in turn is linked to the amount of fruit and vegetables consumed.

In the past 50 years, an increasing number of people in the West have developed allergic asthma. But dietary habits have also changed during the same period with fruit and vegetables playing an ever smaller role in people’s diets.

Now new results, published in the journal Nature Medcine, suggest that these two developments are not merely simultaneous, they are also causally linked. Using an animal model a team of researchers from Lausanne University Hospital (CHUV) has shown that the lack of fermentable fibers in people’s diet paves the way for allergic inflammatory reactions in the lungs.

Influence extends to the lungs

A fermentable fiber is a type of fibre that acts as food for good bacteria in the gut.Both soluble and insoluble fibres can be fermentable. Indeed the concept of fermentable fibre has overtaken simple distinctions between ‘soluble’ and ‘insoluble’ in recent years.

Researchers have already known for some time that the microbial diversity in the gut when digesting and fermenting fibres plays a significant role in preventing intestinal cancer.

“We are now showing for the first time that the influence of gut bacteria extends much further, namely up to the lungs,” says lead researcher Benjamin Marsland. His team either put mice on a standard diet with 4% fermentable fibres or gave them low-fibre food with merely 0.3 % fermentable fibres.

This low-fibre food is largely comparable to the Western diet, which contains no more than 0.6 % fibres on average.

When the researchers exposed the animals to an extract of house dust mites, the mice with the low-fibre food developed a stronger allergic reaction with much more mucus in the lungs than the mice with the standard diet.

Conversely, a comparison between mice on a standard diet and those eating food enriched with fermentable fibres likewise showed that these dietary fibres have a protective influence.

This protection is the result of a multi-level reaction chain, say the researchers. First the fibres reach the intestine, where they are fermented by bacteria and transformed into short-chain fatty acids. These acids then enter the bloodstream and influence the development of immune cells in the bone marrow.

Attracted by the extract of house dust mites, these immune cells wander into the lungs, where they eventually trigger a weaker allergic response.

Marsland suggests that the results obtained by his group are clinically relevant not only because the share of plant fibres in Western diets is comparable to the low-fibre food given to the test animals, but also because the examined aspects of the immune system are virtually indistinguishable in mice and humans.

His team is already planning more  clinical studies to find out how a diet enriched with fermentable fibres affects allergies and inflammations. Even so, it is already sufficiently clear, however, that in addition to all the other ways in which a healthy gut can support health, here is yet another reason why one should eat more fruit and vegetables.

Most fruit and vegetables contain fermentable fibred but foods such as chicory root, Jerusalem artichoke, yams, dandelion greens, leeks, onion, garlic, oats, barley and bananas are particularly good sources. Cereal fibres that are rich in cellulose, such as wheat bran, are relatively resistant to bacterial fermentation (an other reason to get beyond bread and pasta habit). Supplements containing fructo-oligosaccharides (FOS) can also help feed good gut bacteria.

Garlic, onions and leeks, all members of the allium family, are good sources of gut-friendly fermentable fibre