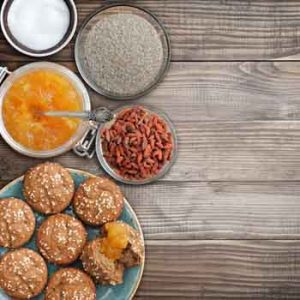 If you suffer from allergies the fibre and beta-carotene in a bran muffin and some apricots could keep your immune system from over-reacting. [Photo: Bigstock]

Natural Health News — Eating a diet rich in fibre has the potential to reshape the immune system to reduce allergic reactions to substances such as peanuts, new research shows.

The study, published in the journal Cell Reports, suggests that a simple bowl of bran and some dried apricots in the morning could be all that’s needed. It also delves into how the immune system works with the good bacteria in the gut to help protect against life-threatening allergic responses.

There is a global allergy epidemic – and Australian children have the highest recorded rate of allergies in the world.

The study, led by Monash University in Victoria, Australia, revealed that it may be a lack of fibre in our diets that’s causing this deadly rise in allergies.

» There is a global allergy epidemic – and Australian children have the highest recorded rate of allergies in the world.

» Australian scientists, using an animal model, have found that a high fibre diet produce beneficial changes in the gut, and so the immune system, which effectively can prevent it from triggering an allergic reaction.

» The high fibre diet had the unexpected result of also upping vitamin A levels – which also help dampen down allergic responses.

» Say the researchers, bowl of bran and some dried apricots in the morning could be all that’s needed to keep allergies at bay.

The research, conducted using mice that were allergic to peanuts, found the animals were protected against the allergy when fed a high-fibre diet. In particular, the fibre appears to act by producing beneficial changes the gut microbiota, the bacteria in the gut that protect against food allergies.

The scientists suggest that allergy treatments could use probiotics (beneficial bacteria) that recolonize the gut, or prebiotics (healthy foodstuffs) that could work together to prevent or reverse allergies

The scientists, from the laboratory of Professor Charles Mackay, further unravelled how a high fibre diet protects against allergies. They found that short-chain fatty acids boosted a particular subset of the immune system called dendritic cells, which control whether an allergic response against a food allergen happens or not.

Effectively, increased levels of short-chain fatty acids switch these cells to stop the allergic response, while a lack of fibre may have an opposite effect. These specialised dendritic cells require vitamin A, another factor which can only be obtained through the diet, and is high in vegetables and fruits in the form of beta carotene.

While deficiency of vitamin A in adults is unusual, the researchers suggest that less than ideal levels of vitamin A in addition to short-chain fatty acids, could promote food allergies in infants. This may explain why the highest prevalence of allergies occurs in children and infants.

Lead researcher Jian Tan said the study had not only revealed how the immune system fails when a person becomes allergic, but how the immune system can be helped through diet, to prevent or lessen the effects of allergies. He said the next step was to conduct trials with humans to determine how a high-fibre diet can protect against challenges with allergic foodstuffs.

If you suffer from allergies the fibre and beta-carotene in a bran muffin and some apricots could keep your immune system from over-reacting. [Photo: Bigstock]