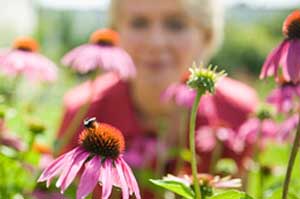 If you've tried everything else for hayfever, why not try strengthening your immune system from the inside out with probiotics

Of all the things that you can take to relieve the misery of hay fever it’s possible that you never considered probiotics.

Hay fever leaves many people feeling as though they have been knocked sideways and desperate to take anything – tablets, nasal sprays and even nasal balms – for relief.

Yet when hay fever symptoms are getting you down you may not consider the role your gut has to play in making symptoms worse or better.

Every day our immune system must distinguish between “friends” that can be beneficial to our health and “foes” that can have harmful effects. There is now a growing body of evidence that the gut microbiota, the trillions of bacteria that live in our gut, influences that recognition and thus has an impact on how the body reacts to airborne allergens such as pollen or fungal spores.

» Friendly bacteria in your gut help regulate your body’s response to allergens.

» Look for supplements with a broad range of probiotics and consider supporting your system with helpful herbs and nutrients.

But can probiotic supplements containing ‘good’ bacteria really help? There is certainly evidence that it can.

Probiotics are beneficial bacteria similar to those that occur naturally in the human gut and help promote a healthy digestive system. Changes in the delicate balance of intestinal bacteria have been linked to many types of disease including certain allergic disorders, leading many to suggest that supplementation may be beneficial.

Benefits from drinks and supplements

Probiotics are beneficial bacteria similar to those that naturally occur in the human gut and help promote a healthy digestive system. Changes in the delicate balance of intestinal bacteria have been linked to certain allergic disorders, leading scientists to theorise that probiotics may affect the body’s immune system.

Some very positive studies have been done using a probiotic found in a drink (Yakult) which most of us can purchase in the supermarket.

An early study from 2008 showed that giving test subjects this drink, which contains the probiotic Lactobacillus casei Shirota, for 5 months changed how their immune systems responded to grass pollen. Scientists could see the change by looking at the subjects’ blood, which produced lower levels of the inflammatory antibody immunoglobulin E (IgE).

IgE is a key player in hay fever and other types of allergic reaction; your immune system produces it in response to exposure to allergens.

A larger study of 425 people in 2014 indicated that a supplement containing a different probiotic, Lactobacillus paracasei LP-33 for 5 weeks, were associated with significant improvements in the quality of life for hay fever sufferers who were also taking an antihistamine for their symptoms, compared to antihistamine alone.

Linking gut and the nose

Another study, published in 2013 suggested how probiotics might help.

The British researchers gave 60 hay fever sufferers daily probiotic drinks for 16 weeks, outside of the hay fever season. One group was given a drink containing Lactobacillus casei Shirota, and the other group received a very similar drink without the probiotic.

Volunteers who received the probiotic drink saw changes in allergic inflammation in their nasal lining, as well as changes in their blood, that are associated with immune responses suggesting that probiotics can interact with cells in our gut to produce systematic changes in cells lining our nasal cavity.

In another Finnish study of children allergic to birch pollen and taking conventional hay fever treatments, researchers attempted to find out whether birch pollen allergy symptoms are linked with changes in the gut microbiota and secondly whether probiotics have an effect on this.

They gave the children either placebo or a supplement containing Lactobacillus acidophilus and Bifidobacterium lactis Bl-04.

They found that in the probiotics group during May, there was a tendency for fewer people to report runny nose, though eye symptoms were not significantly affected, while during June fewer subjects reported blocked noses. Overall, subjective reports showed that respiratory symptoms, such as a runny nose and a blocked nose were alleviated by approximately 20%.

Objective testing showed that fewer subjects in the probiotic group had infiltration of eosinophils (a type of white blood cell that becomes active when you have certain allergic diseases and infections) in the nasal mucosa compared to the placebo group. Tests for the inflammatory antibody immunoglobulin A also showed this was higher in the placebo group but that the increase was prevented by probiotics. In other words, probiotic supplements produced measurable as well as subjective beneficial changes.

The range of probiotics that have been tested for hay fever relief is still very narrow. If you are looking to try this remedy for yourself it may be best to try a supplement that contains a broad range of probiotics. It is also important to select probiotics that are manufactured in capsules with a special coating that ensures the bacteria will survive the rigors of digestion and be able to colonize the gut. See our article How to choose a probiotic supplement for more advice.

In addition to probiotics, supplements commonly recommended for hay fever and seasonal allergies include combinations of herbs and nutrients such as stinging nettle, quercetin, bromelain and bitter orange peel. These ingredients act by providing antioxidant strength to maintain stable mast cells and support the body’s efforts to maintain normal mucous membranes and keep nasal passages clear.  Herbals teas are often a good way to take these healing herbs throughout the day

If you've tried everything else for hayfever, why not try strengthening your immune system from the inside out with probiotics